Truffle-hunting dogs. On the scent of a rare delicacy. 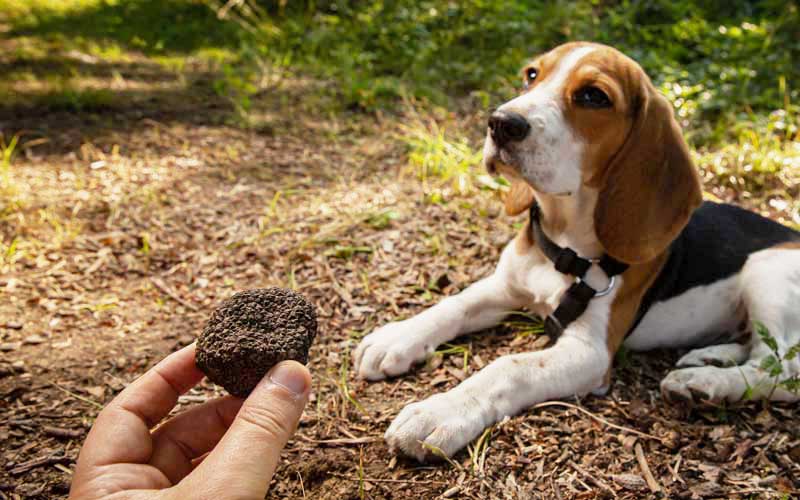 Imagine a drizzly day, sometime in the late autumn.

You’re headed out into the country, to a favorite spot in the woods.

You’re looking forward to spending the day, trekking between the trees in search of the “gold” of the culinary world.

It’s just you, a guide, and the guide’s truffle-hunting dogs.

Now, if you thought pigs were the animal of choice for rooting out truffles, you’re not alone. Pigs are iconic truffle hunters… but these days, they are far less common than dogs.

Truffles are a rare and hard-to-find fungus.

Truffles are the fruiting bodies of an underground ascomycete fungus. They are edible, tasty, and some are insanely expensive… $5,000 a pound or more for sought-after varieties, like the Piedmont white truffle.

There are dozens of species of truffles, and some of them are quite rare, making them a true delicacy.

Unlike mushrooms, truffles grow underground. That makes them more difficult to locate and gather, which is why truffle hunters employ a little help.

That’s where the dogs come in.

Why do people - and pigs and dogs – get so excited about truffles?

A big part of that taste profile is connected to their incredible aroma.

The aroma comes from a combination of chemical compounds, and it can vary between different kinds of truffles. It’s potent enough that a very small amount of truffle can give a heady, earthy flavor to food.

Truffles also contain pheromones. They have androstanol, a human steroidal pheromone. And also androstenone, a pheromone produced by boars during their mating season.

It’s that boar pheromone that made pigs popular for truffle hunting. Pigs are naturally drawn to the scent. They’ll seek out and root for truffles without any training at all.

Pigs tend to eat the truffles when they find them. And wrestling a truffle from the jaws of pig isn’t easy.

Dogs work a little differently than pigs. They can be trained to scent out and find truffles. But they don’t tend to eat them when they find them… and there are no doggie pheromones involved to drive out their desire to please their owners.

A truffle would prefer to be eaten by a wild pig.

Mushrooms grow above ground so they can disperse their spores. For the most part, the spores - the fungal equivalent of seeds - are spread far and wide by the wind, or even gentle air currents.

Other mushroom species, like cordyceps, infect insects. The infected insects travel away from the point of infection, so the mushroom can spread its spores in a new area.

But what if, like a truffle, you grow under the ground? How are you going to be able to disperse your spores?

What you need is a fungivore… an animal that eats fungi, and then wanders off to another area before passing the spores in its feces.

But if you’re underground, how can you catch the attention of fungivores?

You attract them with a very strong aroma that can pass through the soil above you.

That is the one and only reason why truffles have such a strong smell. It’s a message that shouts out into the forest air, “Dig here and eat me!”

Truffles wants to be eaten by a wild pig, or even a squirrel or vole. They wants their spores dispersed.

It’s a fascinating strategy. Grow underground, but create an aroma powerful enough to attract animals that will eat you and disperse your spores far and wide.

Turning to dogs for truffle-hunting help.

While pigs may be the more famous truffle-hunters, dogs are the new favourite, and hardly new to the scene.

The Lagotto Romagnolo, a medium-sized water dog, has been used in Italy to find truffles since the mid 1800s.

But lots of people are proving that notion wrong. There are successful truffle hunters from all manner of breeds including Springer Spaniels, standard Poodles, and Belgian Malinois.

Using dogs to hunt truffles has spread well outside of Italy, France and Spain. It’s a common practice in the United Kingdom and in the Pacific Northwest of the United States.

There’s also a growing truffle industry in Australia, and they employ the help of dogs, as well.

Try your hand at truffle hunting.

As a result, commercial truffle hunters can be very secretive, keeping competitors away from their best hunting grounds.

In some areas the competition is so fierce, it’s not unknown for truffle hunters to have their best dogs stolen.

Other professional are less secretive and will be happy to act as your guide… for a fee.

Just about anywhere that truffles grow — typically in forests located in mild climates that don’t get too hot in the summer and don’t have hard frosts in the winter — you can find truffle hunters who are willing to take you out on an expedition.

They’ll teach you to work with their trained dogs, help you find good locations (often where they’ve found truffles before), and accompany you on the hunt. You pay a fee for the experience… but you get to keep the truffles you find.

Do a Google search for truffle-hunting guides in your area and you might get lucky.

Or, if truffle-hunting out in the woods isn’t your thing, you can buy truffles and truffle products at gourmet food stores, both offline and online at websites like Earthy.com.

Either way, enjoy the hunt!