Cordyceps mushrooms – Big health benefits from one of nature’s horrors. 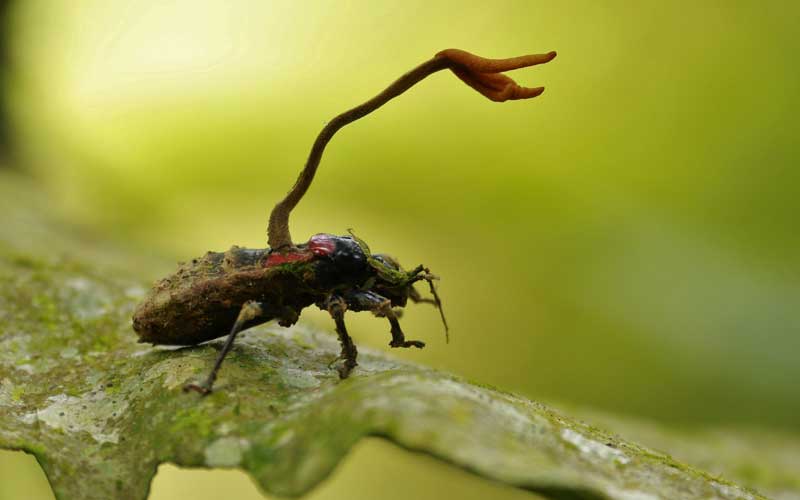 Look hard enough, and you can find some pretty unusual mushrooms. Take Lion’s Mane, for example. It doesn’t even look like a mushroom. Neither do Chaga mushrooms.

But search far and wide, and you’ll be hard pressed to find a stranger mushroom than the Cordyceps variety.

Cordyceps are parasitic mushrooms that grow on the bodies of insects. Most cordyceps make their home on insect larvae. They attack their host’s tissue, replacing it, and then sending out slender fungal stems from the host’s body.

The most exotic of these mushrooms attacks living ants, draining them of nutrients and even taking over their mind. An ant that’s fallen victim to the zombie mushroom will travel away from its nest and up the stem of a nearby plant where growing conditions for new zombie spores are ideal. It doesn’t do this by choice. The zombie mushroom compels it to.

Nature can get pretty weird.

The more run-of-the-mill Cordyceps mushrooms have been used by Chinese healers for centuries to treat fatigue, cancer, and other illnesses.

While there are around 750 different species of Cordyceps, the one that is most often used to promote good health is Cordyceps Sinensis (CS).

A treasure trove of beneficial compounds.

The polysaccharides in CS offer a number of potential health benefits. Researchers have identified polysaccharides that may support healthy blood sugar and cholesterol levels and others that may also help to regulate the immune system.

The nucleosides, adenosine and guanosine, may also serve as immune system regulators. And adenosine could provide some protection to the cardiovascular system. It may have an anti-inflammatory effect in the body as well, and research suggests it’s able to suppress cell growth, which could make it useful in cancer treatments.

Because of the role adenosine plays in muscle contractions, researchers have begun to explore CS’s ability to increase energy levels and improve exercise performance. The muscles in the body use adenosine when they are working, so more adenosine in the system might mean more fuel for the muscles.

Animal studies have given weight to this hypothesis.

In one study researchers worked with four groups of a rats — a control group, an exercise group, a group that received CS supplementation without exercise, and a group that received both CS supplementation and exercise. They found that, after 15 days, rats receiving CS without exercise nearly doubled their exercise endurance and rats receiving both exercise and CS nearly tripled theirs.

But it isn’t just animal studies that look promising. In a small double-blind clinical trial, 20 healthy seniors either took CS or a placebo three times a day. Those in the CS group saw increases in their exercise performance over the course of the 12-week study. The placebo group did not have any notable changes.

Far more research needs to be done before any solid conclusions can be reached, but so far, it looks like CS has the potential to boost performance and energy levels.

Protecting your heart in many ways.

Cordyceps Sinensis (CS) may be beneficial to heart health.

In one animal study, CS provided protection to the cardiovascular system in the aftermath of a cardiac event. CS reduced diastolic dysfunction and helped the coronary flow get back to normal levels faster.

One of the polysaccharides in CS proved to lower blood pressure in rats. The compound stimulated the production of nitric oxide, a vasodilator, and reduced production of C-reactive protein, a common marker of inflammation.

Another mushroom enters the cancer fight.

Cordyceps join many other species of mushrooms in helping in the fight against cancer.

For example, in lab studies and animal studies, a water extract from CS proved to inhibit the spread of breast cancer.

When breast cancer cells were treated directly with the CS extract, the cancer cells’ viability was inhibited. The same researchers gave mice with breast cancer the CS extract. The mice lived longer than those in a control group, and the amount of MMP-9 produced by the sick mice fell by 50%. MMP-9 is a compound associated with an inflammatory response as well as the breakdown of cellular proteins. It’s also common in the presence of tumors.

The research on CS so far is promising. Unfortunately, CS is difficult to harvest and process into a supplement. You can find true CS supplements, but they’re often prohibitively expensive. Naturally derived CS can run as much as $9,000 per pound!

The good news is you can purchase a lab-grown CS supplement known as Cordyceps CS-4. In tests CS-4 has higher levels of the beneficial bioactive compounds than naturally grown CS.

Supplementing with CS-4 is generally safe, especially in the short-term. If you’re taking medicine for diabetes or prescription blood thinners, you should take CS-4 only under a doctor’s care, since it may interfere with those medications and put your health in danger.

If you’re in good health or have the all-clear from your doctor, CS-4 may give you more energy and could potentially help you to manage more serious health conditions like heart disease or cancer.