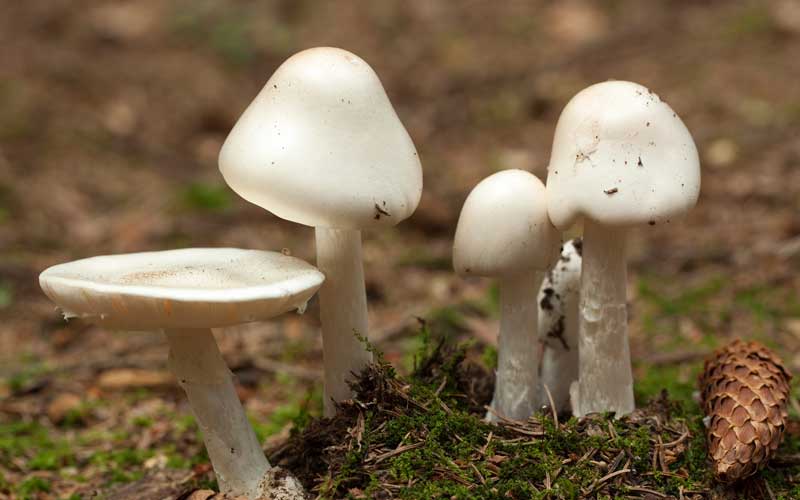 Destroying Angel mushrooms - they look harmless, but they're not!

Culinary and medicinal mushrooms offer a wide range of benefits, from tasty meals to tangible support for your health, like a stronger immune system and protection against cancer.

But not all mushrooms are friendly.

Some are actually quite deadly.

In the United States, about 7,500 people report eating toxic mushrooms every year, mostly by accident. Fortunately, the vast majority of those people have minor symptoms of discomfort and don’t require much in the way of medical care.

But about 39 people do land themselves in the hospital, and in some cases only survive the encounter because they were able to get a liver transplant. About three people die every year from eating poisonous mushrooms.

These numbers are just for the United States. Europe and Asia have similar trends.

If you’re interested in foraging for wild mushrooms — and that can be a fun and rewarding experience — you do need to understand the risks and learn how to avoid them.

Fortunately, just a few of the tens of thousands of species of mushrooms we’ve identified and catalogued are deadly. And only a few dozen more are toxic enough to make you sick if you eat them, without killing you.

The problem is some of the tastiest wild mushrooms share similar traits to some of the most poisonous.

And that means some inexperienced foragers can put themselves and the people they share meals with in very real danger.

When it comes to avoiding poisonous mushrooms, the safest bet is to buy your mushrooms from a grocery store or from a specialty vendor. You’ll get mushrooms that you can count on to be safe.

But there are certain mushrooms you simply can’t find in the store. And shopping the produce section just isn’t the same as foraging for and gathering your own wild mushrooms.

If you want to do that, though, you need to train for it. And even then, only eat mushrooms you are absolutely certain are safe.

The compound alpha-amanitin can be deadly even in small amounts. If you ingest a mushroom containing this amatoxin, you won’t feel anything for six to 12 hours. Then symptoms will begin to show. You’ll experience stomach upset, including vomiting, cramps, and diarrhea. After 24 hours of gastrointestinal distress, you may experience a period of improvement before the toxins begin to attack your liver, kidneys, and nervous system. At that point, your blood sugar will drop, many of your organs will begin to fail, and you may slip into a coma. About 50% of people experiencing advanced symptoms die.

And even if you survive your encounter with an amatoxin-laden mushroom, your liver might not. Quite a few cases result in the need for a liver transplant.

Conocybe Filaris grows in the Pacific Northwest and is often found in people’s lawns. It contains similar toxins as the Death Cap. While it is not readily mistaken for an edible mushroom, you do have to be mindful to prevent children and dogs from eating them.

The other common source of amatoxins are the destroying angel mushrooms. These three varieties of all while mushrooms are easily mistaken for button mushrooms. They grow throughout North America.

A totally different kind of mushroom poisoning comes from Deadly Webcaps and Fool’s Webcaps, both of which grow in Europe.

These mushrooms contain orellanin, a toxin that may stay latent in your system for up to three weeks. At that time, it may begin to cause flu-like symptoms followed by kidney failure if untreated.

Because of the delay in symptom onset, this type of mushroom poisoning can be particularly difficult to diagnose and treat.

Mushroom myths that can get you killed. 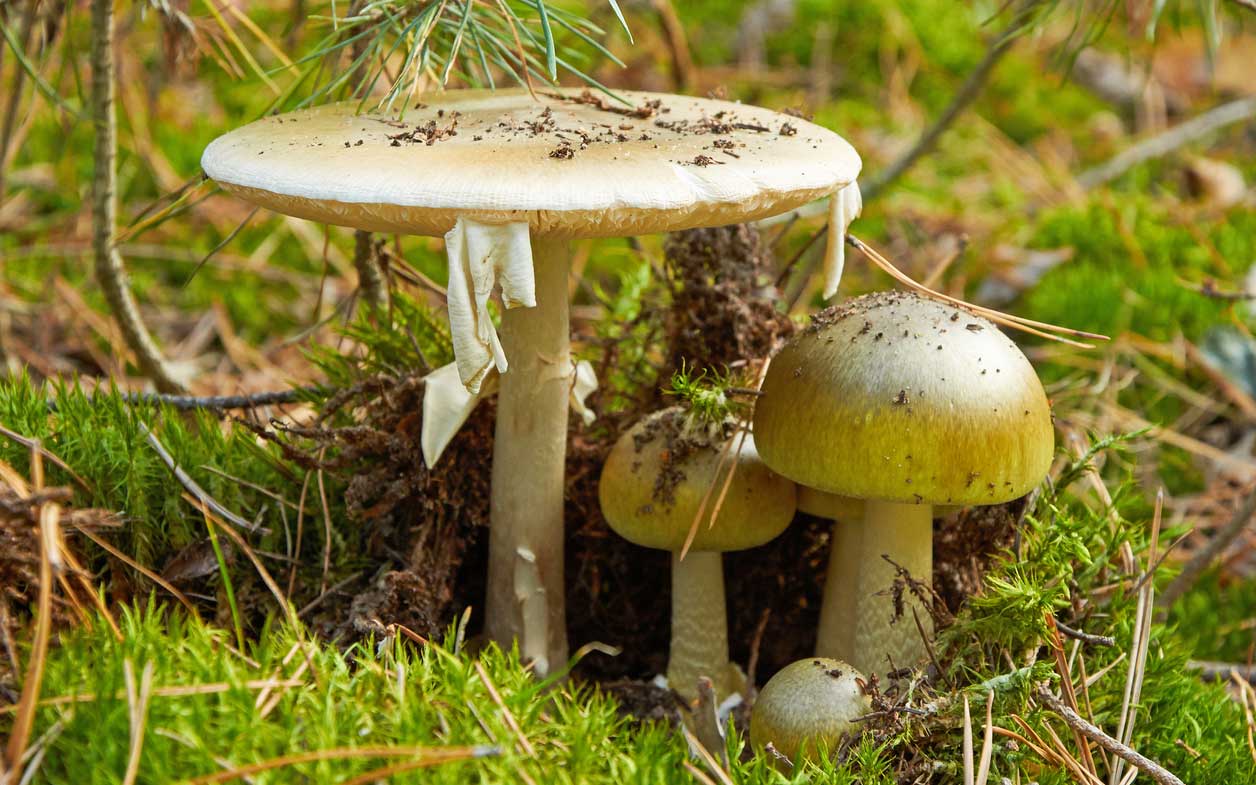 These Death Cap mushrooms can be fatal if eaten.

Back in late 1980s, a family went for a walk in the Columbia River Gorge in Oregon. While there, they found several dozen mushrooms that looked like they could be good to eat.

They picked them, took them home, and “tested” them to make sure they were safe. They soaked them in rice water, believing an old wives’ tale that poisonous mushrooms will make rice water turn red.

Thinking the mushrooms were safe, they added them to a stir fry and shared a meal.

The mushrooms were Death Caps.

Five people ended up hospitalized, with three of them requiring a liver transplant.

Unfortunately, there are a lot of myths and old wives’ tales floating around about mushrooms.

A few of the most popular include:

• “Mushroom toxins will turn a silver spoon black.” They won’t.

• “Cooked mushrooms are safe to eat.” Amatoxins and many others are not broken down by heat.

• “If insects eat it, so can you.” Some things that are toxic to you won’t hurt bugs.

• “Poisonous mushrooms taste bad.” Some do, but some don’t.

You have to be able to distinguish between the two.

Safe foraging means working with an expert… at least to start.

A lot goes into mushroom identification.

Remember, the safest way to get mushrooms is to buy them from the grocery store or from an experienced mushroom grower or forager.

Another safe way to get wild mushrooms is to grow your own. Both Shiitakes and Oyster mushrooms are fairly easy to grow at home, even for a beginner.

But if you’re really sold on foraging for your own mushrooms, there are books and even apps for your phone that can help you identify mushrooms in your region. It’s also a good idea (a really good idea!) to take a class from a mycologist, preferably a class that includes field time.

Foraging for wild mushrooms can be a rewarding experience, one that is a lot of fun. But make sure you do it safely. If not, you could end up feel miserable… or worse.