Turkey Tail mushrooms – They’ve been under your nose this whole time. 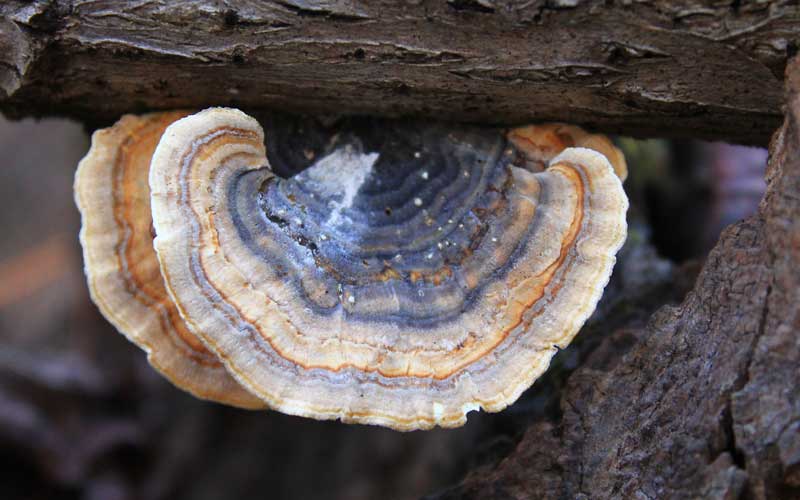 While hiking through the woods, you might have spotted Turkey Tail mushrooms without even realizing it.

These fan-shaped mushrooms grow on tree trunks. They have striking, colorful stripes. Between the stripes and the shape they look a lot like the tail of a turkey, hence the name.

(A quick warning — there are many fan-shaped mushrooms that grow on tree trunks. Unless you’re an expert on identifying mushrooms and fungus, don’t try to harvest Turkey Tail on your own.)

Of the many mushrooms with medicinal qualities, Turkey Tail is one of the most researched and best understood.

Turkey Tail’s medicinal use dates back as far as 200 B.C. where it’s mentioned in the Chinese Materia Medica. Scientific research on the Turkey Tail began in the 1960s in Japan. Researchers there isolated a specific polysaccharide that became known as PSK. PSK proved useful in supporting cancer patients undergoing chemotherapy. Some Japanese doctors and hospitals began using as a routine part of cancer care.

A similar situation arose in China in the 1980s when researchers there isolated another useful polysaccharide, PSP. This one proved helpful for patients being treated for lung or gastrointestinal cancers.

These two polysaccharides launched immune-oncology, a concept that has made its way to the forefront of cancer research.

While PSK and PSP are perhaps the best known and most used compounds from Turkey Tail, this impressive fungus is full of bioactive compounds. Researchers have identified 38 phenolic compounds in Turkey Tail mushrooms. These, in addition to flavonoids, terpenoids, and other polysaccharides, mean that Turkey Tail is loaded with health-supporting potential.

While compounds derived from Turkey Tail mushrooms are regularly used in medicine in eastern countries, the number of clinical trials on these mushrooms is still scarce. The lab, animal, and clinical evidence available so far is very promising, though.

Turkey Tail may be able to support cancer patients in a number of ways.

It may help to strengthen the immune system during conventional cancer treatments like chemotherapy. A strong immune system can make a big difference in overall outcomes.

In a small-scale clinical trial, eleven women with breast cancer took part in a study designed to determine if Turkey Tail is helpful after receiving chemotherapy and radiation therapy and also to see if it is well-tolerated. The results indicated that it could help to improve immune status in patients being treated for breast cancer. A study this small doesn’t offer conclusive evidence, but it does indicate that further research is warranted.

In another study, the PSP from Turkey Tail proved to activate monocytes, a type of white blood cell that can kill malignant cancer cells.

Turkey Tail gets the most attention because of its potential as an adjuvant cancer therapy, but its potential health benefits don’t stop there.

One small clinical study on the antiviral properties of Turkey Tail yielded impressive results. Sixty-one patients with confirmed oral human papillomavirus were divided into two groups. Group one was treated with Laetiporus sulphureus, a mushroom commonly called Chicken of the Woods. Group two was treated with a combination of two mushrooms, Turkey Tail and Ganoderma.

A healthy digestive system is the first step toward a strong immune system.

Another way that Turkey Tail potentially supports the immune system is by promoting a healthy digestive system.

How to benefit from Turkey Tail.

Turkey Tail, as a supplement, is generally well-tolerated. For some people, it does cause some gas or bloating. Darkened fingernails are another possible side effect.

Overall, though, the evidence seems to suggest that Turkey Tail can safely strengthen and support your immune system in a number of ways.

Turkey Tail isn’t a food mushroom — its texture doesn’t lend well to eating — but it is readily available in supplement or tea form.

As always, if you have any health conditions or are taking any medications, talk with your doctor before taking a new supplement like Turkey Tail.