Our interview with Skye Chilton, founder of Real Mushrooms. 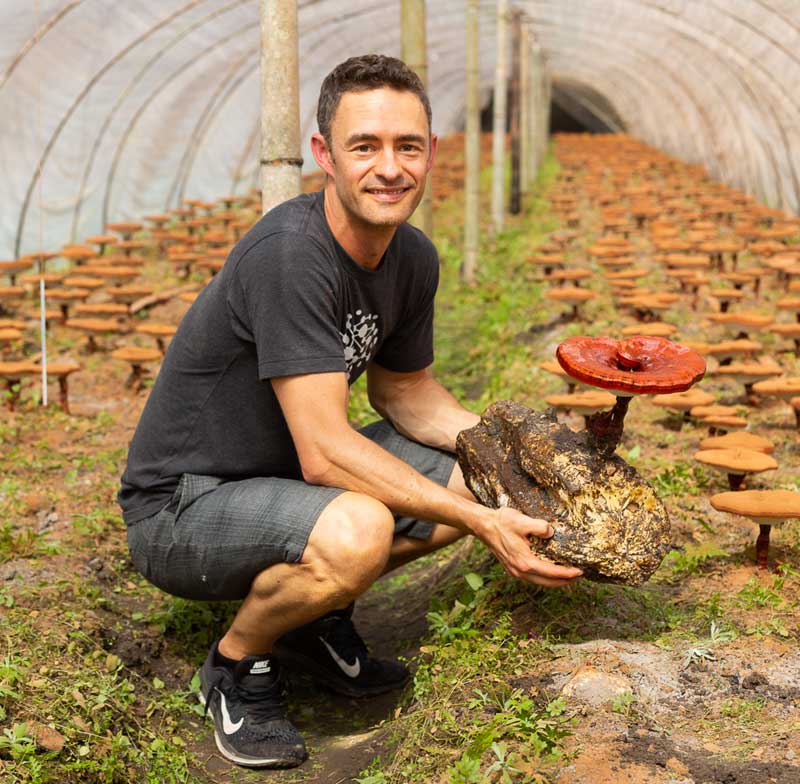 Skye Chilton of Real Mushrtooms with a crop of Reishi mushrooms.

Skye is the son of Jeff Chilton, who has been a giant in this industry for over 40 years. In other words, Real Mushrooms has a deep and long history.

This kind of history matters in an industry where most of the companies we come across are relatively young.

That’s why I was so keen to talk with Skye, and get his thoughts and opinions on the state of the mushroom supplement industry. After all, if we’re taking supplements, we want to be taking products we can trust

Full disclosure… while Real Mushrooms isn’t paying for me to conduct this interview, in any way, I am a customer and have been for over a year now.

Let’s get started with the interview. It's a long one, but well worth your time if you want to know more about mushroom supplements, and which ones to choose.

IM: Before we talk about mushroom supplements, I’d love to know a little more about you. Your father is famous in this space, but what made you want to pursue a career in mushrooms? And when and how did you get started?

SC: I definitely had no early plans to have a career in mushrooms as a kid. I was around mushrooms a lot, helping my Dad with his business doing odd jobs or going out foraging but I was really more interested in sports and computers. I played varsity baseball at University and ended up with a double major in Computer Science and Math. This took me into working in healthcare, coding on the side and eventually working for a small education start up as their senior web developer.

It was until I started my own business with some friends did I really start to connect with my Dad about mushrooms and his business. During this time, I was also reconnecting with my own personal health; eating better, exercising more and pursuing personal development.

This really gave me a lot more perspective on what my father had accomplished as well as just how undervalued and underrated mushrooms still were. So it took me a long time to come around to mushrooms but now I’m fully committed to educating people about mushrooms and making sure we have the highest quality products to go along with it.

IM: I’ve been following alternative and natural medicines for decades now, and it seems to me that in North America we’ve been incredibly slow to catch onto the medicinal qualities of mushrooms. Why do you think that is?

SC: North America is still very mycophobic and scared of mushrooms whereas many European cultures still have a rich history of mushroom foraging and consumption.

My own hypothesis is that the early European settlers did not know the mushrooms here so they chose to ignore them as many can be poisonous. This lack of mushroom consumption has made people’s palettes not use to mushroom tastes and textures.

Standard diets often lack bitters and umami type flavors which are more common in Asian cuisines. Aside from the button mushroom which is bland in comparison, culinary mushrooms have only recently become more readily available in grocery stores and farmers markets.

Still, many people think you’re talking about psychedelics when you mention anything to do with mushrooms so I know we’ve still got a long ways to go.

IM: As for the mushrooms supplement industry, there seems to be a lot of confusion about what consumers are actually buying and taking. Without getting into the details quite yet, can you give us a quick overview of the two “camps” among mushroom supplements companies? 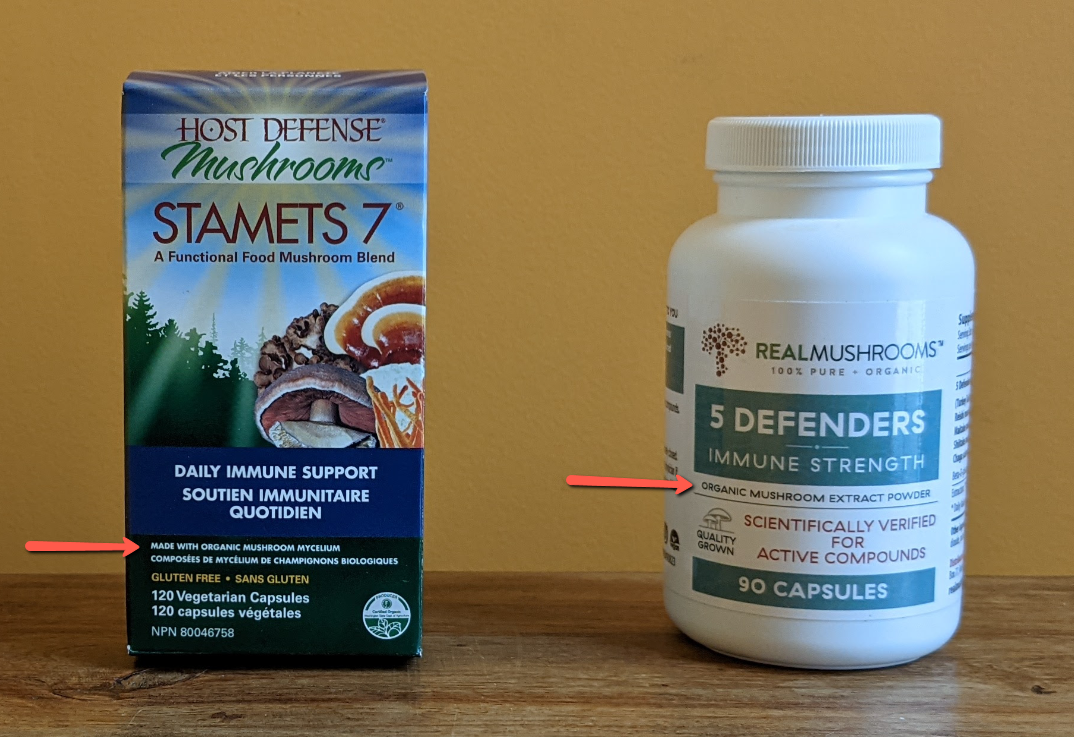 SC: The major differences are whether the products are made from the mushroom (fruiting body) or the mycelium (vegetative body). These are two of the three stages for these fungal organism: mushroom, mycelium and spore. Most people know what the mushroom is but do not know the mycelium, the root system of the mushroom. People try to label this as a mushroom vs mycelium issue but it’s really a grain issue.

When mycelium is grown in North America, it is primarily grown on a grain substrate. The mycelium grows out on sterile grain and becomes an inseparable block which is then dried and powdered and sold as a “mushroom” supplement though it contains no actual mushrooms. Not only is there no mushrooms, but a very large part of the product is the grain substrate, leading to high amounts of starch. This dilutes the amount of mycelium that can be present which in turn dilutes the amount of active compounds.

In many cases these products are more grain than mycelium, which begs the question, can these even be classified as mycelium products if the primary ingredient is grain?

One example of a pure mycelium product is Cordyceps Cs-4, which has a large body of research but it is very different from Cordyceps myceliated grain. Cs-4 is primarily produced in China. PSP from China and PSK from Japan are both highly refined adjunct therapy drugs derived from turkey tail mycelium.

Myceliated grain is grown in North America because it is too expensive to grow mushrooms to make extract powders. This is why almost all mushroom extract powders come from China.

China grows over 90% of the world’s mushrooms and was the first country to cultivate mushrooms over 800 years ago. Mushrooms are one of their top agricultural crops and they have a rich history in traditional Chinese medicine.

IM: When it comes to the active, medicinal ingredients in mushrooms, what kind of difference are we looking at here?

SC: The most well known and likely most researched compounds are the beta-glucans. These are complex polysaccharides that make up much of the fungal cell wall in mushrooms and mycelium. Much of the immunomodulating effects come from the beta-glucans. As they make up a large percentage of the cell wall, we can also use this as a determination of fungal content.

Mushrooms are generally high in beta-glucans averaging around 25-30% with reishi and turkey tail topping out in the 50%+ range.

With myceliated grain, we typically see less than 5% beta-glucans. This is usually in direct correlation with the amount of grain present. More grain equals less actives like beta-glucans.

But many of these compounds, like the ones in lions mane, do not have commercial test methods available so we have no idea how much are in actual products.

There are other compounds common to mushrooms and mycelium like ergosterol (fungal cholesterol), glutathione and ergothioneine. Ergosterol can also be converted to ergocalciferol (Vitamin D2) through exposure to UV light.

IM: In a young industry, it’s a shame to see disagreement between the major players. But I guess that’ll resolve itself over time. My biggest concern is for people who simply want to buy the best mushroom supplements for their health. What advice would you give to buyers? How can they be sure of what they’re buying?

SC: While this can easily be seen as bias, we recommend products made from mushrooms which are then extracted as this is consistent with the majority of the research literature.

Extraction break downs the mushroom cell wall, which is made of chitin, allowing our bodies better access to the active components. These mushrooms should also be certified organic as well as verified for beta-glucan content.

Beta-glucan content should be in the Supplement Facts panel as this is legally binding compared to just having a beta-glucan claim in the marketing copy.

Standard testing like heavy metals and pesticides is also a given.

IM: Like you say, some people reading this might be thinking, “Well, of course Skye is going to say that. He’s in the “fruiting body” camp, and is promoting his own business!” Where can people go for third-part information on what we’ve been talking about?

SC: Well there is the McCleary & Draga paper, which measured alpha-glucans and beta-glucans in 12 different products and showed a vast different with some products having no beta-glucans.

Dr. McCleary was the creator of the Megazyme beta-glucan method which any lab can use to analyze for beta-glucan content. Some question the method’s authenticity but it has been used in a variety research papers and the paper above was reviewed and published in the Journal of the AOAC.

The AOAC sets the standards and validates testing methods so at this point, there is no denying that there is an accurate method for validating beta-glucan content in fungi.

The US Pharmacopoeia tested reishi products and found that 74% of the products they tested were not authentic. Starch-like polysaccharides were detected in 68% of samples while the important beta-glucans were only detected in 26% of samples.

ConsumerLab also came out with a report on reishi and while the report had what I would consider low standards for approval, one very popular brand did not make the cut because they found it to be primarily alpha-glucans (starches) as well as it showed photos of the mushroom on the package and the product contained no mushrooms.

ConsumerLab said this was misleading to the consumer which I agree with. Real Mushrooms is currently the brand recommended by this report.

Much of these reports came after my father highlighted the need for better testing protocols to properly qualify products  as well as clearer labelling when it comes to which part of the fungus is used; mushroom, mycelium or spore.

IM: I imagine your travel plans took a hit during the pandemic. But have you travelled to China and seen where the mushrooms for your company are being grown? 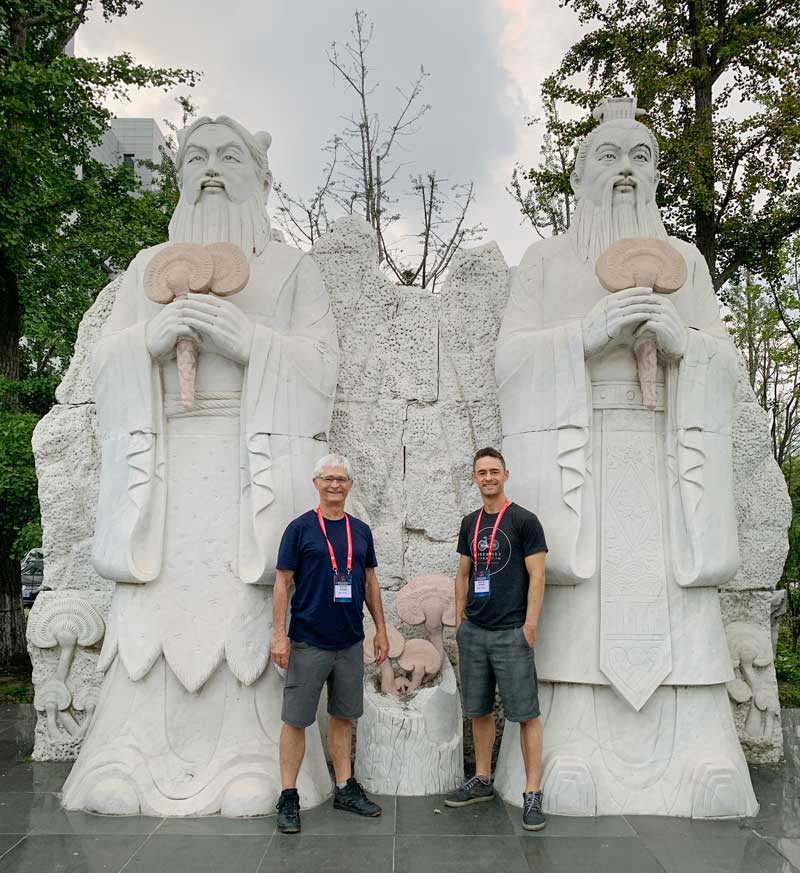 Jeff and Skye Chilton in front of a pair of Reishi statues in China.

SC: I’ve been to China probably 6 times now and am actively learning to speak Mandarin. We usually to go China every year during the harvest season to visit the farms and continue to build the long established relationships with our manufacturing partners.

It’s always a good time and we end up eating so much mushrooms when we’re there. Mushrooms are so much more ingrained into the culture. There’s never a meal that doesn’t have mushrooms.

We also try to attend any conferences while we’re there as well like the International Medicinal Mushrooms Conference (IMMC) in 2019 which was a gathering of hundreds of scientists and industry professionals talking mushrooms and presenting research all week.

SC: Chanterelles are probably my favorite. They’re so good just fried with butter and salt and pepper. Also good with eggs. I have made some pickled mushrooms as well as mushroom ice cubes for adding to stocks or soups or gravy.

IM: Skye, thank you so much for taking the time to answer my questions. I really appreciate it. 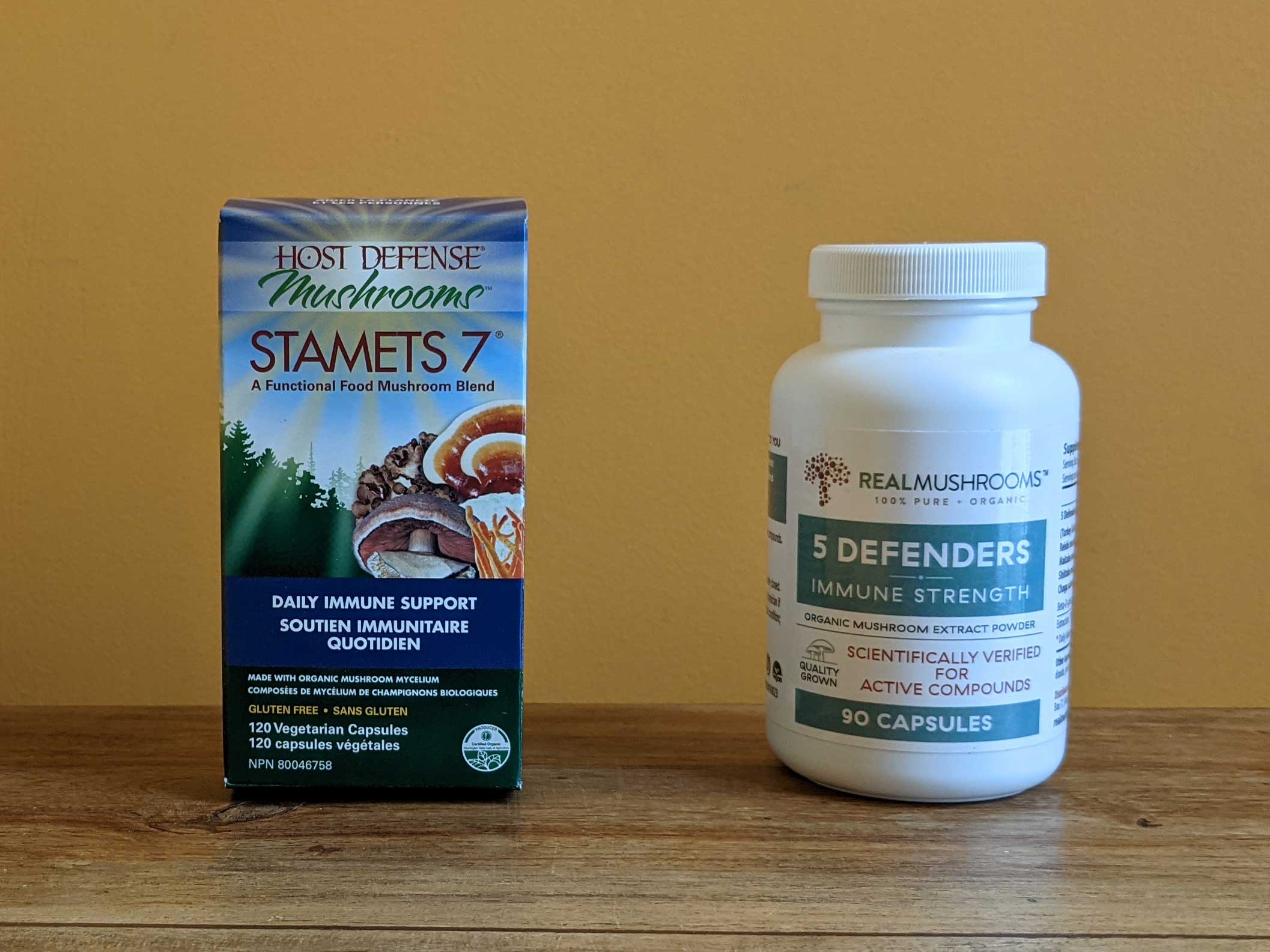 How to choose the best mushroom supplements for your health.

Mushroom supplements are derived either from myceliated grain, or from the mushroom itself. Which is the best? Read the full article…