Our interview with Rodolfo Guzmán, famous chef at the Boragó restaurant, and fervent mushroom lover. 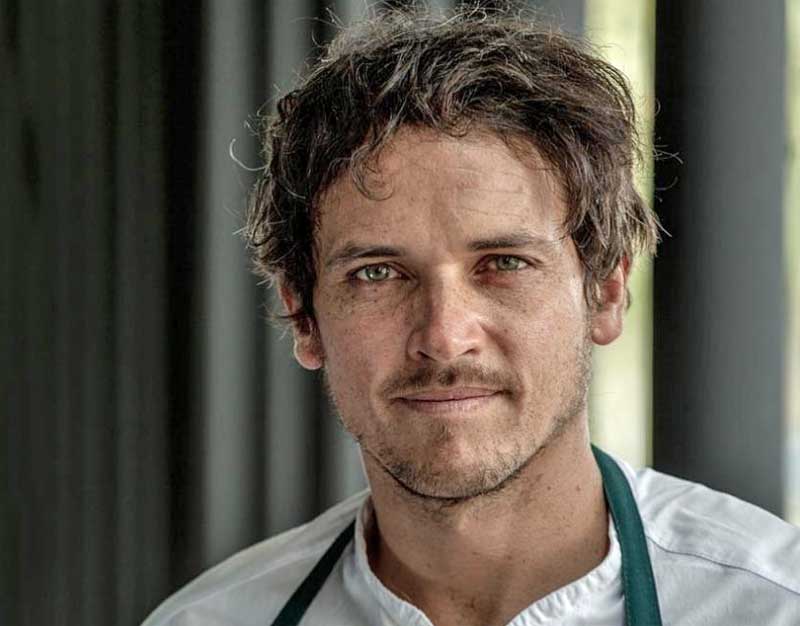 At Incredible Mushrooms, we're very excited to have the opportunity to talk with Rodolfo Guzmán about cooking with mushrooms in Chile.

What’s been happening in Chile is a food revolution. There are many mushrooms that indigenous communities traditionally eat, but these treasures have been hidden for many years. Some of them are unique, and don’t exist anywhere else in the world.

The work of Chef Rodolfo Guzmán and Boragó —the best restaurant in Chile, and one of the best in Latin America— has promoted the use of typical mushrooms of Chilean cuisine.

And in his restaurant, he uses techniques that show us how much power mushrooms have.

He makes kombucha tea, oil, fermentation… uses the umami of mushrooms to sweeten ice cream… dehydrates them in the Andes… and covers them with seaweed. And you’ll always find mushrooms on Boragó's menu.

Rodolfo loves mushrooms. Some of his star dishes are Smoked mushrooms cooked on the embers at a very low temperature, and roasted flowers a la Van Gogh made with a broth of a giant Chilean mushroom called "Loyo". It's wonderful!

I also recommend you take a look at his book Boragó: Coming from the South, to learn more about the varieties of Chilean mushrooms and the wonderful recipes that Rodolfo makes. https://amzn.to/3zVhEtY

And to keep things simple... we'll abbreviate with IM for Incredible Mushrooms and RG for Rodolfo Guzmán

IM: Let's start, how did your story with mushrooms begin?

RG: Fifteen years ago, when it all started, we knew literally nothing about Chilean territory. But in the late ‘80s, the economy exploded, and there was a big change.

We started to fill with Peruvian, Argentinean, and Japanese restaurants. And it was very typical to see fish brought from abroad, truffles, or prosciutto, but what you would never see was a native ingredient.

We gathered a team in a very small house and started cooking with native ingredients so that our cooking would be typical Chilean. Back then, it may have seemed crazy.

Traveling around Chile, we found people who could collect these wild ingredients for us. And Chile is a long and narrow country. Some places are not easy to get to. Logistically, shipping could be difficult.

IM: To get the whole picture of mushrooms in Chile, are mushrooms popular?

RG: Something happened when Boragó exploded in 2013. Many restaurants throughout Chile and even a pizzeria began to say: why don't we include a native ingredient?

And the mushroom harvest parties that have taken place in the south of Chile started to give mushrooms a boost, and chefs from Santiago started to travel to see mushrooms and to contact the same pickers that we did.

So, it began to gain strength until today. And now in Chile, I would dare to say that there is no Chilean restaurant that doesn't have a native Chilean ingredient.

IM: That's great! When you travel to each region to discover more mushrooms, how are native communities using them? 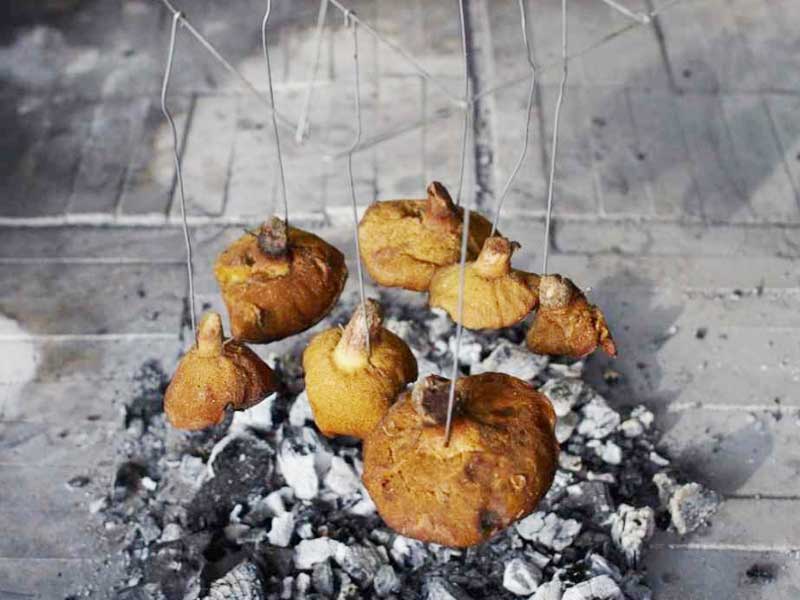 RG: If you ask me what is the most important ingredient in Chilean food, I would say mushroom.

For a geographical reason, everything is made by different types of native wood or different cooking techniques with fire. And fire has a lot to do with how Chilean mushrooms are eaten, and how they have been eaten throughout history.

IM: What are your favorite mushrooms?

RG: We are in season and going to open the Boragó restaurant with a lot of mushrooms, so it's hard for me to say which is my favorite. I am unable to say it. I love Digüeñe. I adore the Morels, Loyos... but I think I change depending on the season. 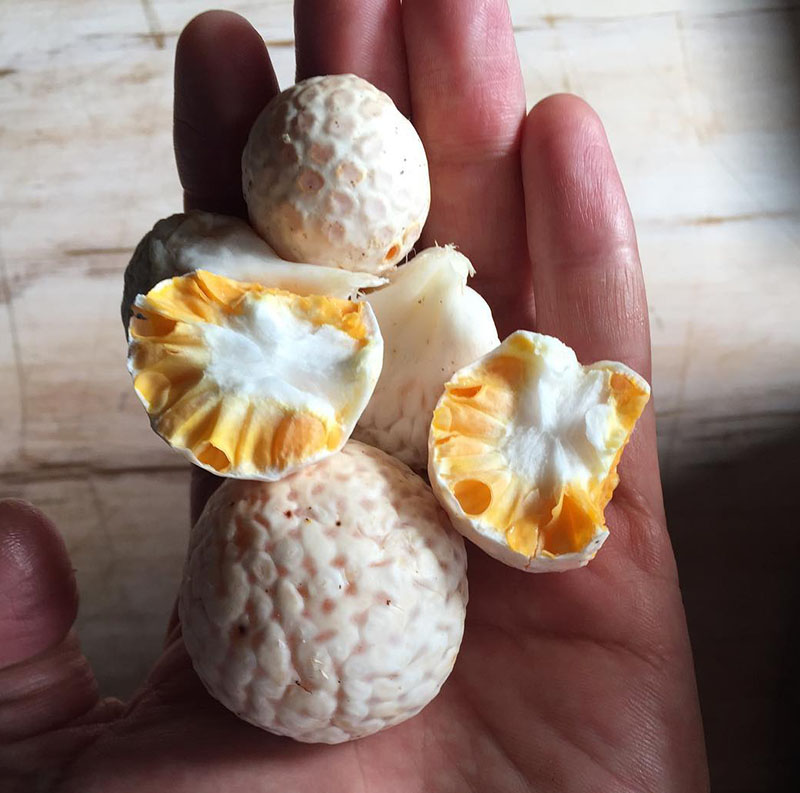 These Digüeñe mushrooms look like a mandarin on the inside.

RG: When you bite it or touch it, it feels like anything but a mushroom. It is a parasitic fungus because it places itself next to Chilean oak, and we have 7 different types of digüeñe. And it’s prepared in ceviche. We use it a lot in desserts. Some species have a sweet touch and others don’t.

IM: And the Loyo mushroom? 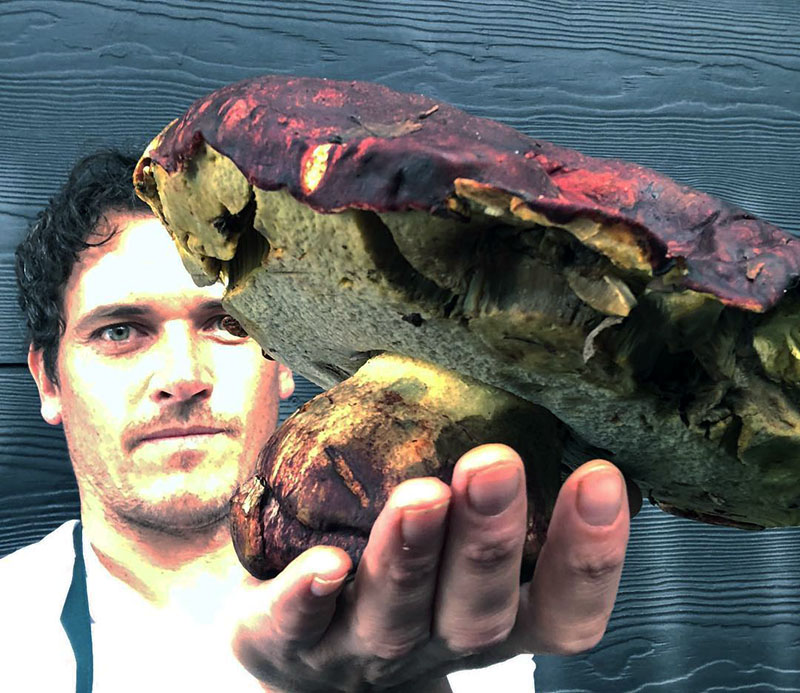 This Loyo mushroom weighs 2 kilos. The Loyo belongs to the Boletus family.

RG: It’s a gem and we have several ways to prepare it. One of the most delicious is a very warm sauteé with raw butter.

We also hang them, thanks to a cooking technique we invented called “mushrooms a la Boragó." It’s a lot of fun, we hang them over the ember and we paint them as the French paint the duck and the outcome is amazing.

There is no mushroom in the world with that flavor profile. It's something very unique that I don't know how to describe. I can tell you it's an umami bomb. If you ask me if I prefer the truffle or the Loyo, I would say the Loyo. The season lasts a month and a half and depending on the season they can be huge. They’re super delicate and the texture is like a marshmallow. It’s a distant relative of the porcini.

IM: It’s amazing, but does the Morchella conica mushroom exist only in Chile? 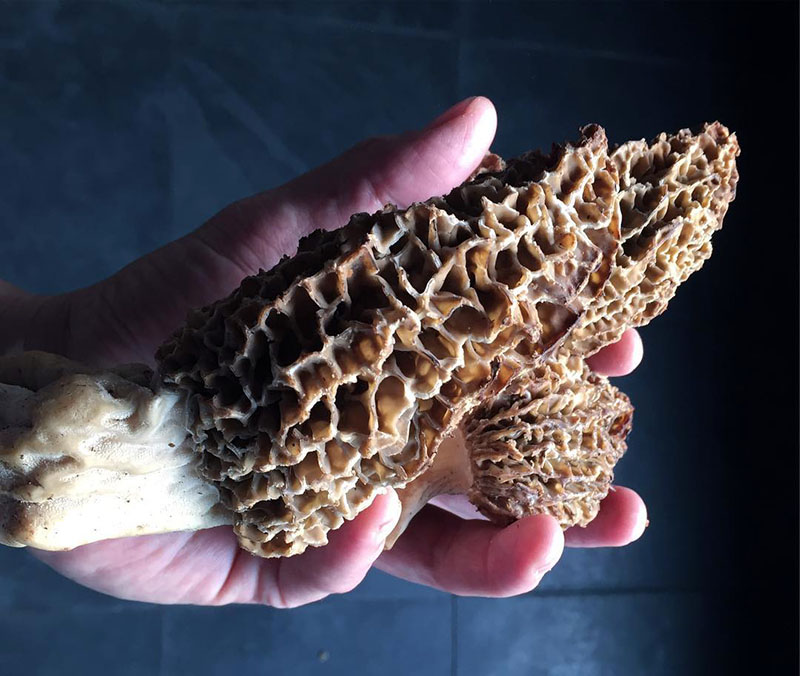 In Chile, the Morilla mushroom is dehydrated and mostly exported.

RG: “The Chilean Morel”, as we call it here.

We have 8 types of Morel or Morchella mushrooms. The last two species have just been discovered.

The beauty of the Morchella conica is that it has an intense flavor more than any other morel I’ve tasted anywhere in the world. They are of high quality and very large, and with long seasons of up to two months in spring, and that’s fantastic.

To prepare it, Morchella always has to be fresh and aromatic. And I love the texture when you soak it in water for a few seconds and then cook it. We do a lot of cooking techniques. Some of them are over direct fire or on a grill. Also, we ferment them and there are different ways of fermenting such as hydrolyze them, and a lot more.

IM: Chocolate mushrooms have impressed me because they grow in the capital. What are they like and how are they prepared? And it is curious that you have a special tool to harvest them. 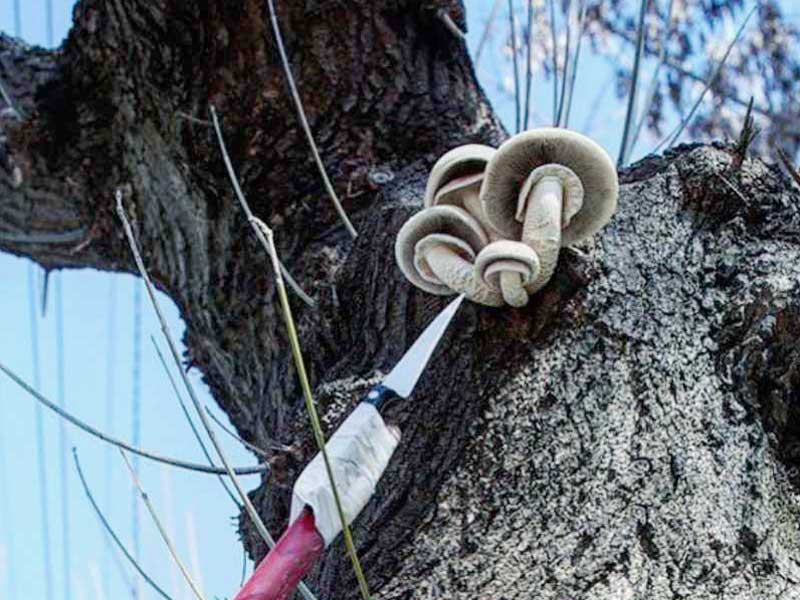 A stick and a craft knife serve as a spear to pick these Chocolate mushrooms.

RG: It’s a mushroom that grows in winter and is tremendously large. We can get about 20 or 40 kilos in a day because it’s the only one that can be collected in the city. It grows near the foothills in a place called La Reina, and dogs cannot do their business on it because it grows 3 meters up in the trees, and it’s not easy to see them.

At first, when it grows it has a yeasty flavor and when you let it ripen on the tree itself it has a prominent chocolate aroma. They’re very nice. When they come out, they look like matsutake. But then, the hat opens up and they are very big with a firm texture. When you cut them you can't drop them on the ground because they break completely, so you have to grab them with your hands, that's the best way. To harvest, one person cuts, and the other catches.

We have done millions of things. A few years ago, we made a mushroom pie, it was a fermented dessert, it can also be made savory. In Boragó's kitchen, practically everything is made over the fire.

IM: What does the Changle mushroom look like? I’ve seen that they’ve different colors. 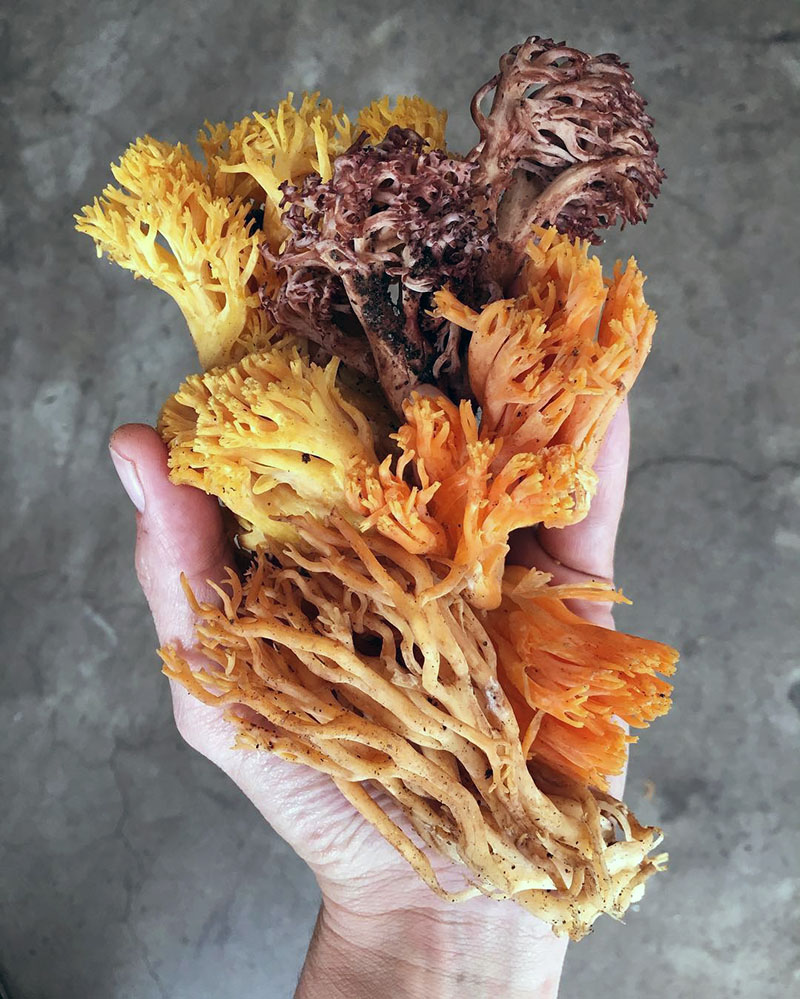 RG: It's from the ramaria family. These coral mushrooms offer a very different set of flavors, and the color dictates the flavor. Some have a very delicate texture and others are much firmer, and they all grow in our autumn.

There are many ways to prepare it, we make them on the ashes. Traditionally, they are used to make stews. We also like to preserve it as vinegar of wild fruits and some oils from some trees and with that, we make an emulsion and preserve them and the result is very good because the texture is very firm.

IM: You dehydrate mushrooms, and not just anywhere... but in the Andes at 3,500 meters above sea level. Why go to all that trouble? 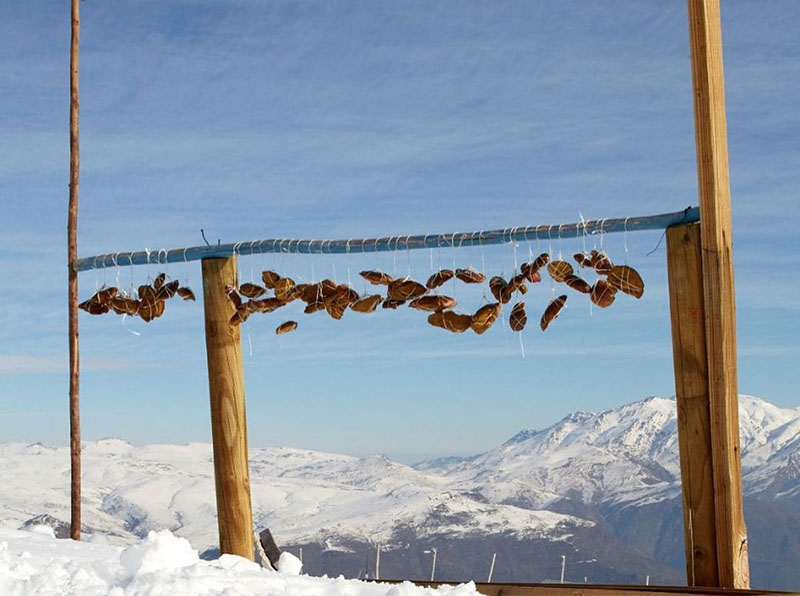 RG: After 15 years, we have learned a lot from the Mapuche people.

On the road, we did things that would never have been possible to do, and one of them has been to take the mushrooms from the coast to 3,500 meters in one day and leave them to age in winter.

In winter, it is about 15 degrees below zero, and there is 0% humidity. It’s very dry and windy. This allows the mushroom to concentrate the amino acids, the water comes out, and it is like a mushroom ham. More than the aroma, it gives a lot of umami. And when cooked, you have the sensation of eating meat because they are fleshy.

IM: Thank you for taking the time to talk with us, Rodolfo! Chile is definitely the land of mushrooms!

RG: You're welcome! I am happy to talk about the mushrooms I love so much.

Photo courtesy of Rodolfo Guzmán, with thanks.

His book, Boragó: Coming from the South