Maitake mushrooms – A long tradition of medicinal use. 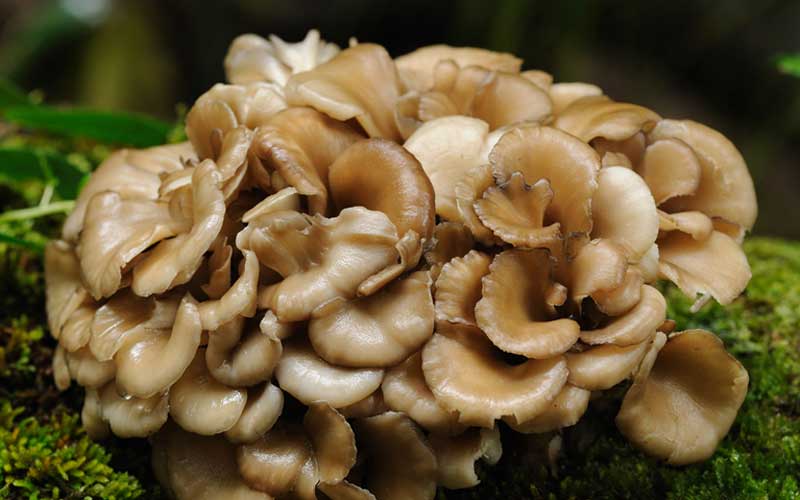 Also known as Hen of the Woods, Maitake mushrooms grow on the roots of hardwood trees.

The Maitake grows in fan-shaped fronds that form rosettes. The fronds are one to four inches in diameter, but a full rosette can grow up to two feet across. A single Maitake can weigh as much a hundred pounds… although ten pounds is more common.

Some say the Maitake fronds taste a bit like chicken when it’s cooked (doesn’t everything?), which may be why it’s known as the Hen of the Woods. But others describe the taste as earthy and robust.

At any rate, they make good eating. Maitake mushrooms also have a long history of being used medicinally.

Over the centuries, it’s also developed a reputation as a useful cancer treatment.

The question is, were ancient healers on to something?

Maitake mushrooms contain a unique protein-based beta-glycogen (a polysaccharide) called D-Fraction. D-Fraction is well-known for its antitumoral effects, which have long been attributed to its ability to stimulate the immune system.

But there’s more to D-Fraction than that. Even outside of its beneficial effects on the immune system, it works directly against cancer cells in beneficial ways. It seems to modulate the genes that are associated with cell proliferation, cell death, and metastasis. It decreases cell viability and reduces the overall aggression of cancer cells… at least in lab tests on cell cultures.

In addition to D-Fraction, Maitake mushrooms also contain a variety of other beneficial polysaccharides that also exhibit antitumor activity and help to regulate the immune system.

Proteins and glycoproteins from Maitake work as antioxidants, protecting cells from damage.

Many in the medical field believe Maitake has great potential for pharmaceutical applications, and may provide health benefits when used as a supplement.

People with diabetes may find help from Maitake mushrooms…

At least early lab studies suggest as much.

In one study, a specific polysaccharide was isolated and administered to cell cultures. The polysaccharide activated the insulin receptors on the cells, making them better able to metabolize glucose.

In a study on obese rats, researchers also saw positive effects on blood glucose levels from Maitake derived extracts. Rats receiving the extract had better glucose tolerance. Their glucose uptake levels — the ability to move glucose into the cells where it can be used — were restored nearly to normal. In addition these rats also had lower total cholesterol levels.

Human studies have yet to be conducted, but the early evidence from lab and animal studies looks good.

In a review of studies exploring how Maitake mushrooms affect the immune system, researchers discovered clear evidence of benefit… at least in animals.

Various extracts containing polysaccharides derived from Maitake proved to increase the production and activity of immune cells and also increased tumor necrosis factor alpha (a compound that attacks tumors) and immune interferon (another compound that helps your body mount a defense against invading organisms).

In a study conducted on mice, researchers observed a positive impact on immune function from Maitake-derived polysaccharides. The mice in the study had suppressed immune systems. When given the polysaccharides, it stimulated the production of several immune system compounds within the mice.

Researchers concluded that Maitake can help to regulate a suppressed immune system so that it performs closer to normal.

In another mouse study, researchers looked at how D-Fraction affected the immune system of healthy mice. They found it enhanced humoral immunity within the mice. This is the part of your immune system that is freely circulating, attacking pathogens before they can attack and damage cells.

Early evidence suggests that Maitake may prove to be a useful immune booster, but more research is still needed.

Maitake mushrooms may also have some benefit to memory function.

Scientists ran an experiment on aging rats. These rats were old enough that signs of memory impairment were beginning to show — the researchers measured this by having the rats run through a familiar maze. After the rats were given Maitake polysaccharides for eight weeks, their maze scores improved. The level of antioxidant activity in their systems went up. And the Maitake treatment actually improved the structure of their brains in some cases.

Maitake mushrooms won’t be as common in your grocery produce section as, say, Shiitake mushrooms, but you can find them at specialty stores. You can also buy dried Maitake mushrooms online. Soak them for a half hour in hot water and they’ll be ready to add to soups and stir-fries.

Maitake-based supplements — both powders and liquid extracts — are easy to find online as well.