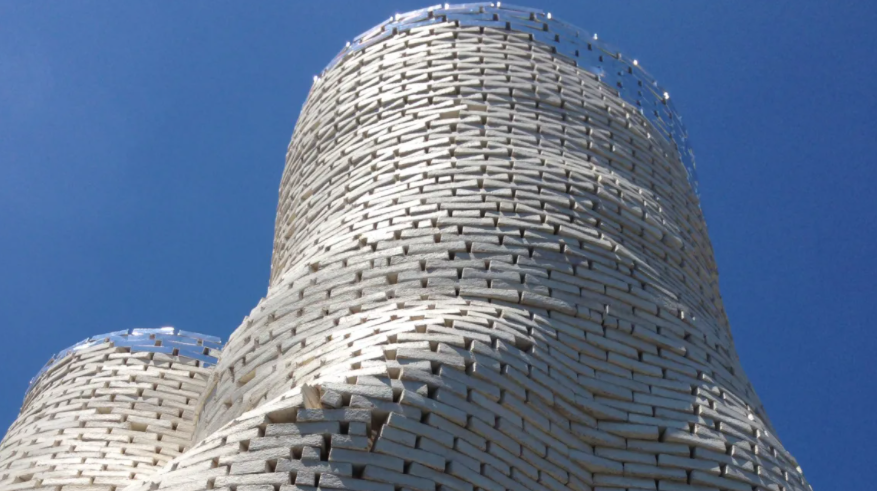 The mycelium tower known as “Hy-Fi” in the courtyard of MoMA’s PS1 space. Photo: Jessica Sheridan on Flickr.

Well, this is weird. On so many levels.

Mushroom mycelium is a delicate network of almost microscopic hyphal threads. How can you make anything with mycelium? Where would its strength come from?

The mycelium itself has almost no strength at all. But it does when you use it as a bio-glue to hold together a substrate like wood chips or straw.

This works in much the same way as creating the particle board you can buy at your local lumber supply store. The board is made from wood chips and shavings, and held together with a resin. (Downside: The resin often contains formaldehyde, a known carcinogen.)

This is also how you build with mycelium. With  a combination of mycelium and substrate.

The ecological case for making and building with mycelium...

The substrate for a mycelium-based product is almost always an agricultural or forestry waste product, upcycled to be used as part of something new.

The mycelium itself is grown within the substrate.

In other words, very little energy goes into the creation of the new product. You grab a waste product that would have been left to rot or go to a landfill, and then inoculate it with mycelium. Nature does the rest.

In addition, when you replace conventional materials with mycelium, you’re keeping a lot of toxic products and chemicals out of the waste stream.

And you’re reducing the need for expending high levels of energy used to create those conventional materials. Cement, for example - a core constituent of concrete - is responsible for 8% of total global CO₂ emissions.

At the same time, we can leave behind some of those constituent chemicals like formaldehyde. And the huge carbon footprint of the construction and manufacturing industries.

Let’s look at some examples.

Use #1: Replace bricks with mycelium.

That structure in the photo at the top of this page is built with mycelium bricks.

What you see is just part of an organic mycelium tower known as “Hy-Fi”, built in the courtyard of MoMA’s PS1 space in midtown Manhattan. It was designed by The Living, a New York based architectural firm.

And yes, the entire structure is built with mycelium bricks… mycelium plus a substrate made with corn stalks.

That’s just one project. A showcase in many ways. There are plenty of other builders and designers working with mycelium-based construction materials.

A company called Ecovative built a model tiny house using mycelium as an insulation material in the walls, instead of the usual petroleum-based foam insulation.

It turns out mycelium has impressive fire-retardant properties as well.

Use #2: Make coffins with mycelium.

Bob Hendrikx, a bio-designer from the University of Delft, has designed a coffin made entirely of mycelium. No wood, cloth, metal or plastic parts. Pure mycelium.

When a body is buried in a mycelium coffin, the mycelium quickly gets to work, decomposing the body and recycling it into the soil as nutrients.

This way we get to give back to the earth that has sustained us during our lifetimes.

We are no longer something to be burned or “buried”.

We can give back and complete the cycle.

Use #3: Make clothing and shoes with mycelium.

From dresses, to shoes, to leather goods… they can all be made with mycelium.

Dutch textile designer Aniela Hoitink has created a dress by putting together disc-shaped segments of mushroom mycelium. She believes mycelium will "change the way we use textiles".

German designer Emilie Burfeind has developed a sneaker with a mushroom mycelium sole.

There are billions of old sneakers in landfills around the world. Each is manufactured with a variety of petroleum-based plastics, some of which will stay unchanged in those landfills for thousands of years.

Use #4: Replace polystyrene packaging with mycelium.

Few things are as wasteful as product packaging.

This is especially true of the use of expanded polystyrene. Its only purpose is to contain and protect a product until it arrives at your home, at which point it is immediately thrown away and ends up in landfill. The process used to manufacture it is wasteful, too.

The product is grown instead of being manufactured with petroleum by-products. And once used it can be composted instead of going to the landfill.

Use #5: Replace leather with mycelium. 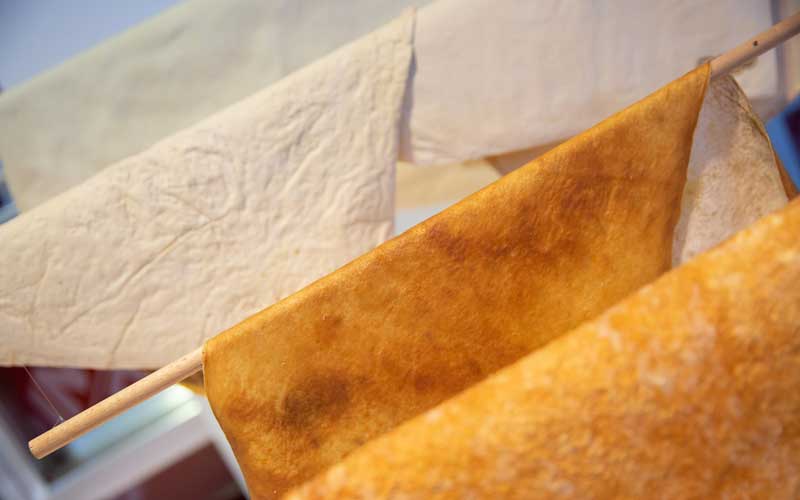 If “leather” could be grown, we could avoid using all the toxic chemicals used in the tanning of animal skins. And a lot of animals’ lives could be saved too.

MycoWorks has developed an alternative to leather, grown from mycelium. Their product, called Reishi™, matches the strength and durability of cowhide. Tough stuff.

Ecovative also make their own version of mycelium leather.

And a company called MOGU makes a variety of mycelium-based products, including acoustic panels, flooring and, yes, leather.

Use #6: Build chairs with mycelium.

Designer Eric Klarenbeek worked with scientists at the University of Wageningenhas to create a 3D-printed a chair using living fungus.

Plenty of people are growing mycelium in substrates that are packed into forms or moulds. This is the everyday approach. You can use it to make mycelium bricks, tables or even chairs.

What Klarenbeek is doing is a whole lot more interesting, because he and his partners are combining living mycelium with 3D-printing technology.

If you can 3D-print mycelium, there are few limits on what you can build.

Use #7: Create fungal computers with mycelium.

If you find 3D-printing with mycelium exciting, you may want to sit down.

Professor Andrew Adamatzky, of The Unconventional Computing Laboratory in Bristol in the UK, is working on a project that could use mycelium as a fungal computer.

This wouldn’t be the kind of computer that sits on your desk. But it could give computing power to a smart house, for example.

Oyster mushroom mycelium is already being studied for use as a biosensor.

Now think of that sensory capacity being grown into the structure of an entire building. Mycelium could be used to sense changes in light, temperature, and even fluctuations in air pollution.

That’s the kind of moonshot thinking that’s going on in the minds of Andrew Adamatzky and his colleagues.

Are we nearly there yet?

There’s no question that it’s early days for all of these projects.

That’s why I find this subject so fascinating.

It’s like we’re at the beginning of something huge. Like we’re just scratching the surface of what mushrooms and fungi can contribute to our lives.

And it’s fun to follow along when scientists and entrepreneurs are making so many new discoveries.

To keep up with what’s new, be sure to sign up for our newsletter. You’ll find the sign-up form in the right-hand column of the page.