Our interview with Atsushi Takata - Japanese chef, restaurant owner, and lover of mushrooms. 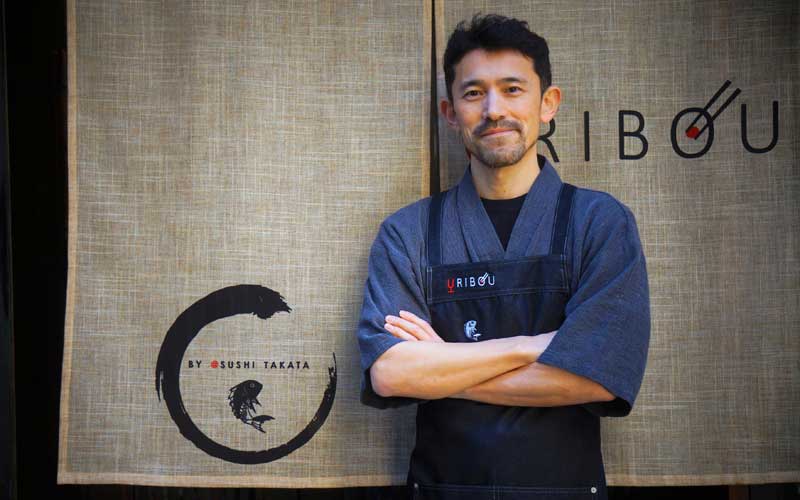 At Incredible Mushrooms, we are very excited to have the opportunity to speak with Atsushi Takata, better known as "Taka," about how mushrooms are prepared in traditional Japanese cuisine.

Taka, a native of Hiroshima, is the chef and owner at Uribou, a highly-respected Japanese restaurant.

Before we get into the interview itself, there’s one thing that came up during our conversation I wanted to share.

Taka was explaining to me that Japanese people have such a deep admiration for mushrooms, they sometimes prefer to shred them by hand instead of cutting them with a knife.

For mushrooms such as King Oyster, Maitake and depending on the dish, also Matsutake, Taka says, "Hands are the best tools."

I love that. In the west we often obsess over the tools we own and use. And we forget to engage our senses more fully… through touch.

And to keep things simple... we'll abbreviate with IM for Incredible Mushrooms and AT for Atsushi Takata.

IM: What do mushrooms mean for Japanese cuisine?

AT: In Japan, mushrooms are a local product. They sell seasonal and cultivated mushrooms, and there’s also a culture of eating mushrooms.

Since I was a child in Hiroshima, I used to see them in the supermarket. I also remember that I liked to go to the mountains to collect mushrooms. When the season starts, at the end of summer or autumn, you can find Shiitake, Shimeji, Maitake and King Oyster.

Mushroom cultivation is a normal thing in Japan. Every house has dried shiitake because fresh shiitake doesn't have much flavor. The dried one has a great umami taste. It’s used for dashi broth, and its meat can also be used for stir-fries, stews, or as a starter.

IM: How did your story with mushrooms in your cooking begin?

AT: As far back as I can remember, there has always been dried Shiitake at home.

As a child, I went out to play with my friend, and we went to the mountains. There, the neighbours were growing Shiitake in a tree stump for their own use.

That hike in the mountains fired up an interest in mushrooms that is still with me today.

IM: What are your favorite mushrooms, and why? How do you prepare them? 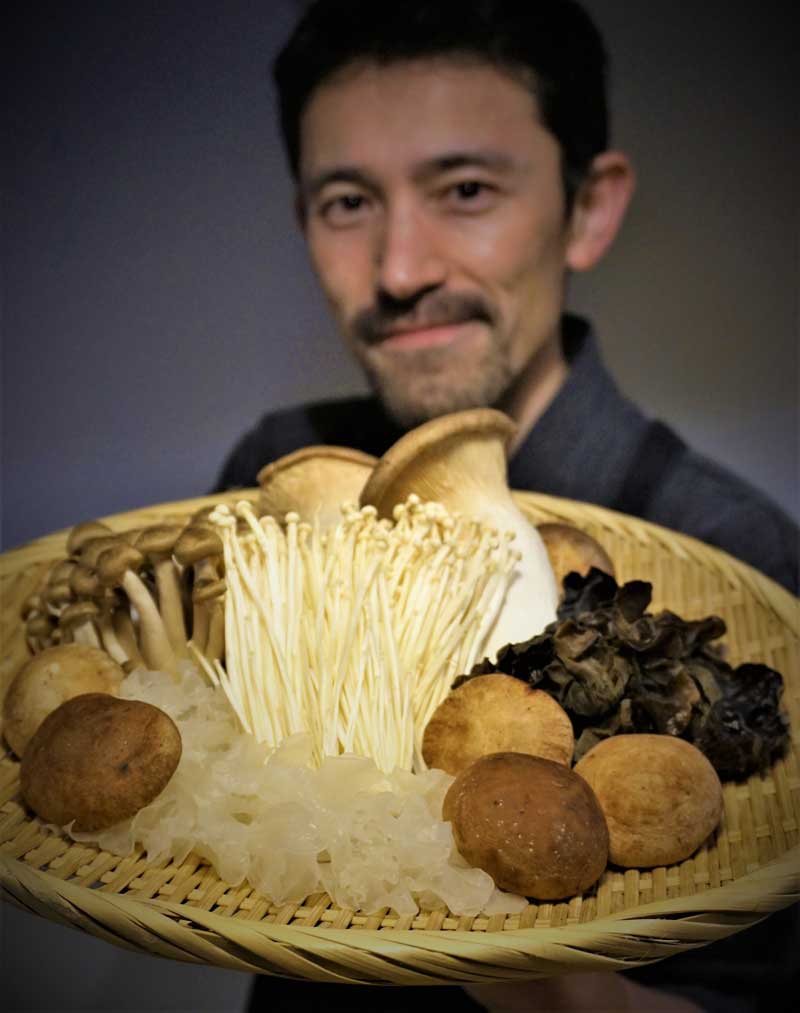 AT: Here are some of the mushrooms I really like. 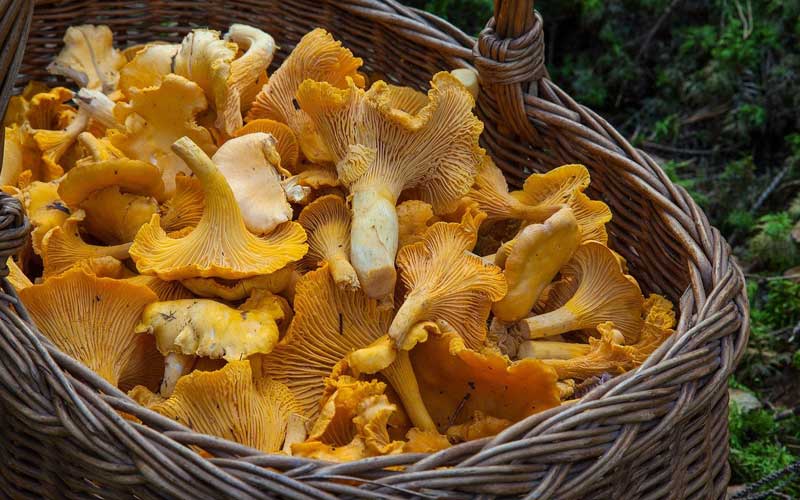 One of my favorites is Cantharellus Anzutake – also known as the Chanterelle. It’s yellow and smells very nice, like floral, ripe fruit, and has a very sweet aroma.

In Japan it is used sautéed, to accompany fish recipes or in Soba noodle soup in autumn, and I add two or three more mushrooms to make a mixture. In the broth, they go together with the noodles. This adds texture, flavor, and aroma. 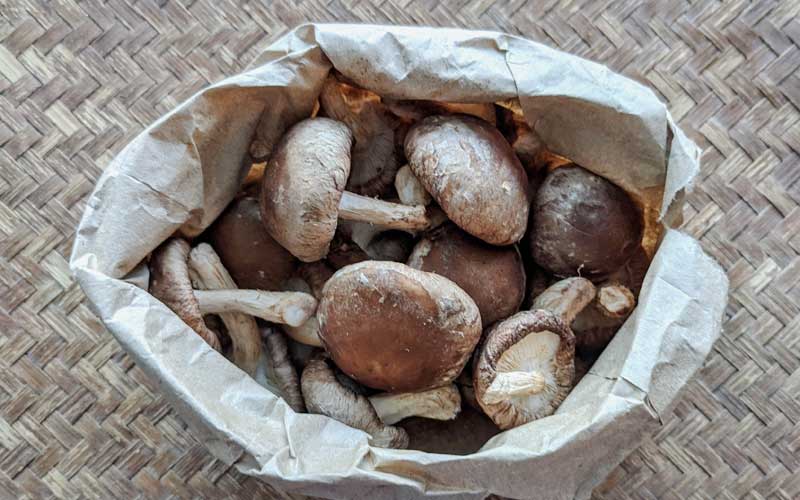 Shiitake is very typical, and I like it because it has many applications. It can be eaten simply grilled. Also, I use dried Shiitake for broths, because it gives a lot of flavor and aroma. 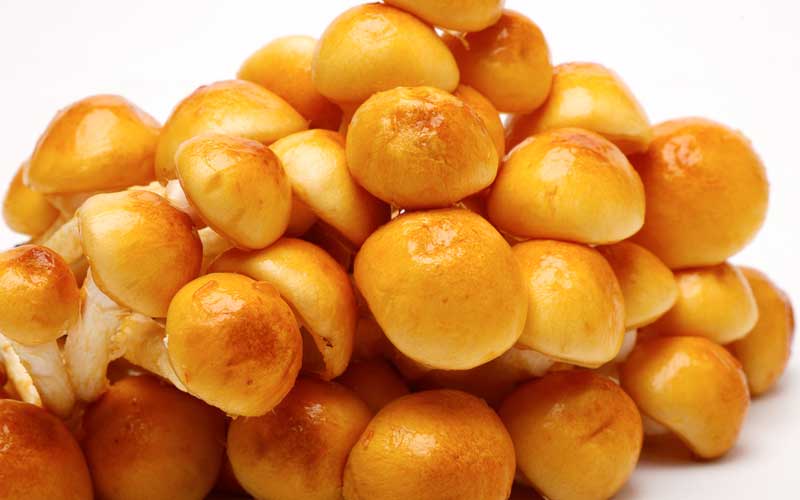 Nameko has mucus, like slime. Its texture is very interesting on the palate. It can be used as chunks in soup or dressing. It’s a bit vinegary and can be used in salads.

IM: When we talk about Japanese cuisine, we often refer to the umami taste. What is umami flavor?

AT: There are many products that have different umami – like tomatoes or cheese. When we make dashi broth - usually with dried bonito and kombu seaweed - this has glutamate and when two or three umami are put together, it multiplies the flavor 4 more times.

The same thing happens with the mushroom, and when it’s dried, the umami increases. That's why we use dried Shiitake.

IM: And how is it dried? 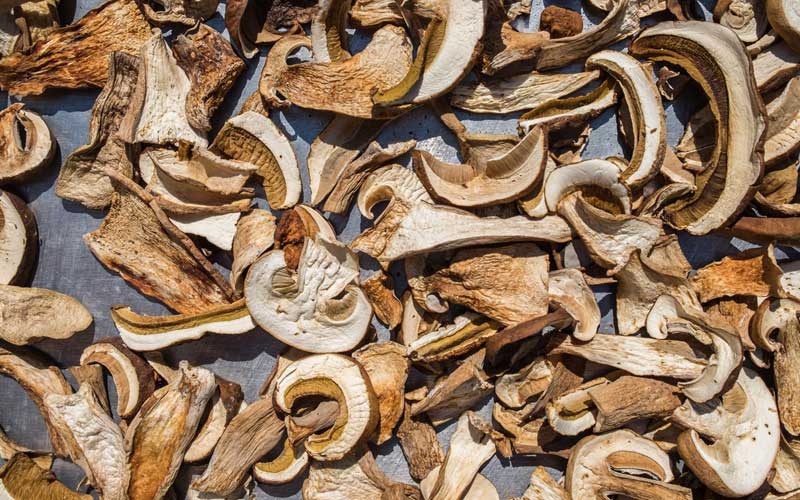 Mushrooms drying in the sun.

AT:  In the past, under the sun. They would pick it up in the afternoon, and the next day, in the morning, when the sun came up, they would put it back. When it's dry, they keep it year after year. Today they do it with a (machine) giving wind with a little heat.

IM: How many days?

AT: It depends on the size. If it’s thick, it can take a week, if it’s not that thick, four days.

The shiitake also depends on the season because when it’s fresh is fleshier, but the head opens more and more, so it becomes thinner and dries faster.

IM: Why are mushrooms in Japan appreciated not only for their culinary use but also for being good for your health?

AT: They have a lot of fiber and fewer calories. When someone wants to diet with less fat, mushrooms can fill your stomach with a lot of fiber. It’s a very healthy product, and its shape is also very pleasing.

IM: Why is Matsutake so famous in Japan?

AT: The Matsutake is a rather large mushroom, it can measure about a palm, similar to King Oyster. But the head is rounder like white mushrooms.

In Japan, Matsutake is considered as one of the best mushrooms because it’s not possible to cultivate them. It has a very pleasant aroma. People usually appreciate it for that. And it’s very expensive, because there are only very limited supplies in the wild,

This mushroom feeds on pine.  If there is no pine, it doesn’t grow.

IM: How much could it cost?

IM: How is it prepared?

AT: They normally cut it very thinly or the easiest way is to grill it and then, tear them into strips, they eat it with soy sauce, lemon juice, or sudachi and salt, and that's it.

IM: One unit... how many people is that for?

AT:  I would eat one or two units alone, but you can eat them in a Dobin Mushi.

This is prepared in a soup with that piece of matsutake inside a kind of teapot.

In this preparation, you don’t add many pieces. Only two or three small pieces of Matsutake, because it’s worth a lot. To appreciate its aroma, they are steamed for a short cooking time, and when you open the lid of the teapot, all the aroma of mushrooms comes out.

For this, a unit of that size could be prepared for up to 15 people.

IM: Why is Matsutake given as a gift in Japan?

AT: Because of its high value and unique taste.

In Japan, the tradition is being lost… but in the past, when I was a child, they used to be given to your boss or your teacher, to someone who has taken care of you or you had a very good relationship.

Matsutake given as a thank-you gift.

It's like giving an expensive bottle of wine as a gift.

IM: Taka, thanks for taking the time to talk with us and share these wonderful photos!

AT: I was delighted to talk with you about Japanese mushrooms.

All photos courtesy of Atsushi Takata, with thanks.

More on the Uribou restaurant.