Our interview with Alex Burgos, chef at Los Danzantes restaurant in Mexico, and a big fan of mushrooms. 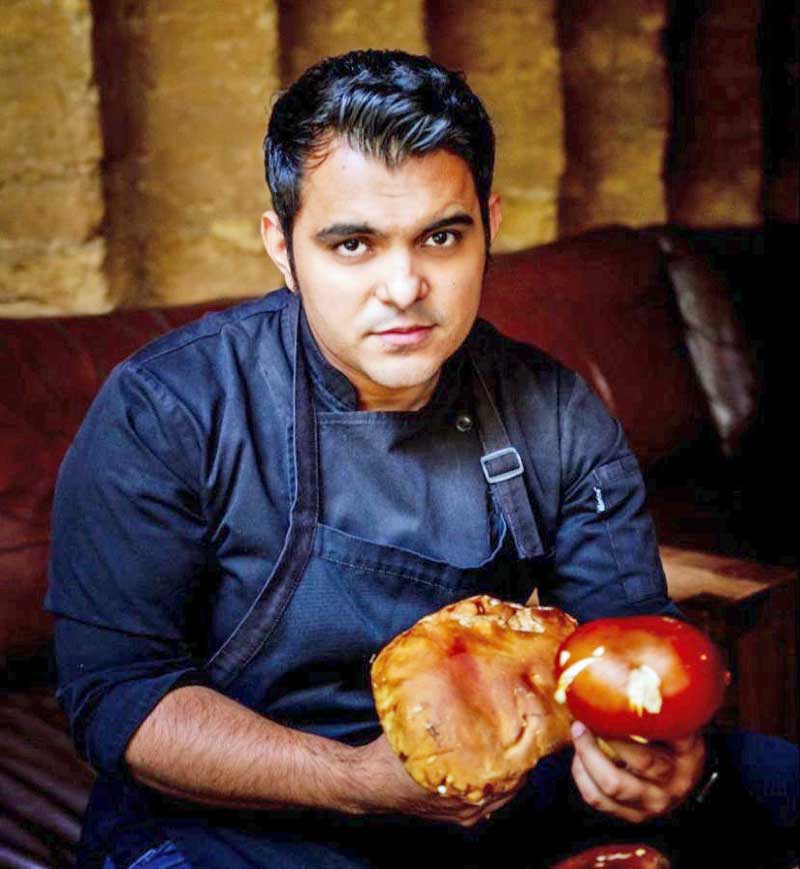 We are excited to have the opportunity to talk with Alex Burgos, chef at Los Danzantes restaurant in Oaxaca, about how mushrooms are prepared in Mexican cuisine.

We have been very lucky because it’s autumn in Oaxaca, the time of its famous mushroom festival which attracts both local and foreign mushroom-loving tourists. In this area, there are more than 200 varieties, but the whole country has a surprising amount of more than 200,000 mushrooms.

One of the most popular varieties throughout Mexico is the most peculiar fungus I have ever seen in my life: the huitlacoche which grows on ears of corn. And although in other countries, it’s considered a corn pest...in Mexico, it’s a delicacy. Chef Alex gives us his trick to cooking it.

Also, at Los Danzantes restaurant, he pays a beautiful tribute to the local mushroom pickers with delicious dishes with fresh seasonal mushrooms throughout July. An essential stop if we go to Oaxaca.

And to keep things simple... we'll abbreviate with IM for Incredible Mushrooms and AB for Alex Burgos.

IM: How is the mushroom festival celebrated in Oaxaca?

AB: The mushroom season in Oaxaca is native to its eight regions, especially in La Mixteca. Almost the entire population of Oaxaca goes to these mountains to collect mushrooms with guides during the rainy season.

Then, they collect the mushrooms and take them to a fair where the village cooks make stews, moles, tacos, stews with pumpkin or corn, and picadillos. Here at Los Danzantes, during that season, we talk with mushroom pickers and visit their communities to pick mushrooms and make special regional commemorative dishes.

IM: So, do you also go to the mountains to collect mushrooms?

AB: I've been cooking with mushrooms for years, and this was my first experience collecting mushrooms. It's very cool to know the product and learn that you mustn't pull the mushroom, you must cut it.

IM: I am surprised because there are 200,000 species of mushrooms. However, only 5% have been studied.

AB: Let me tell you that many of the mushrooms that we found along the way...our collector told us that he didn’t know them, that they had to be researched because he’d never seen them before.

IM: All mushrooms are wild, but are there cultivated mushrooms?

AB: Yes, Shiitake and Pleurotus (Oyster) mushrooms. They are sold every month throughout Mexico. In fact, they can be found in shopping malls, supermarkets, and markets.

IM: What mushrooms do you serve in the restaurant? 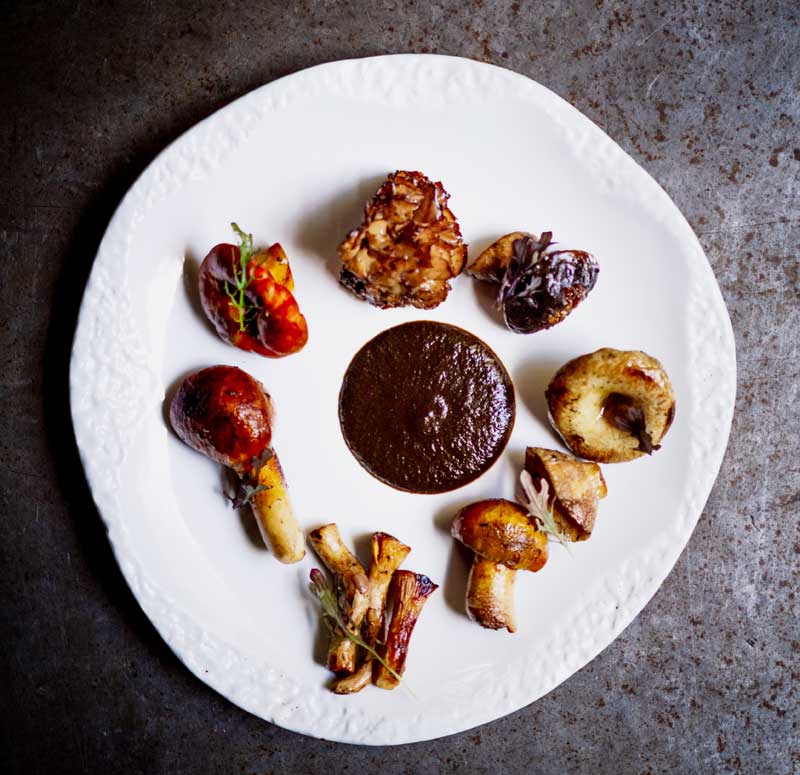 AB: The ones we use are Porcini, Caesar's Mushroom, Woolly chanterelle, Girolle, Cauliflower mushroom, Coral mushroom, and Lobster mushroom which looks like a hard reddish comb of a rooster. That’s why they call it “rooster cockscomb” in Spanish.

We dehydrate them because the restaurant's signature dish is mushroom lasagna from Sierra Sur and Norte of Oaxaca. And as we know that mushrooms are not available all year round...what we do is buy mushrooms from the pickers every two or three days, 10 to 15 kg every week. And we cut them or put them to dehydrate.

Many restaurants call their dishes "rain mushrooms" when they are out of season.

Porcini is one of the most harvested mushrooms in La Mixteca area. 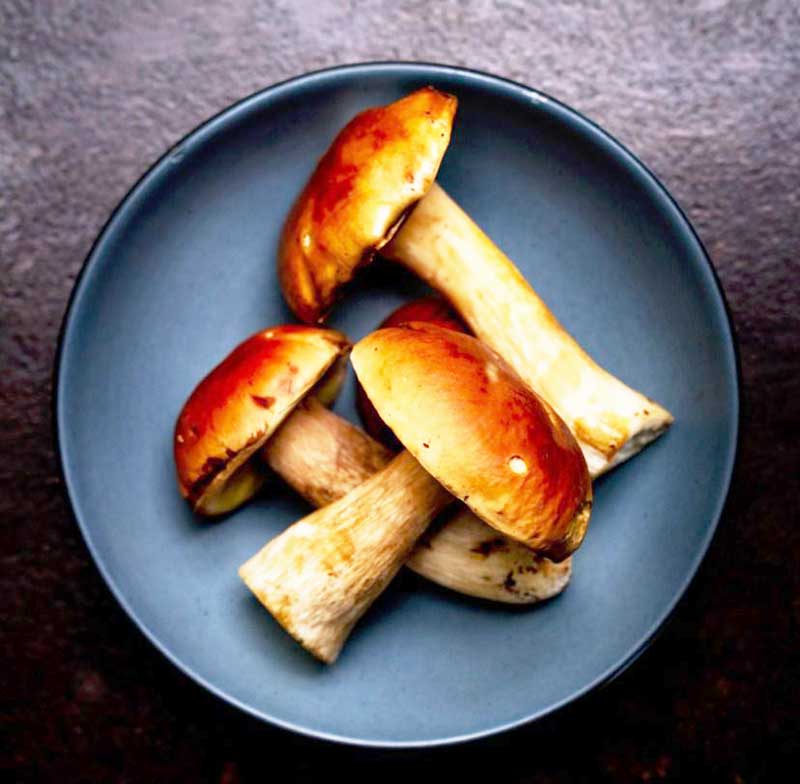 IM: What are your favorite mushrooms and why? And how do you prepare them? 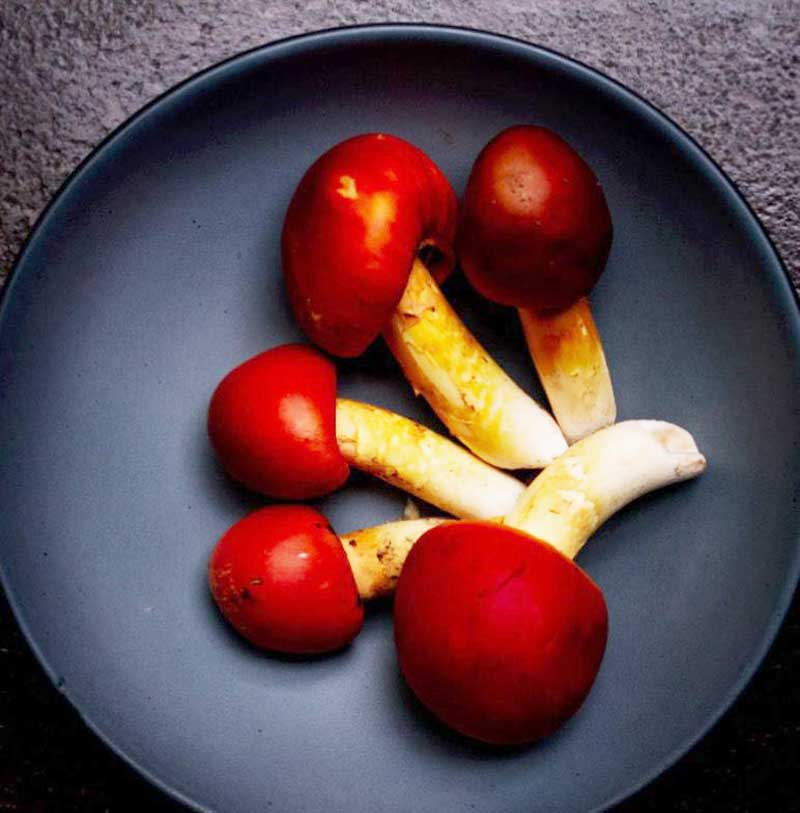 This mushroom is like a little red or yellow ball with a firm stem that you can grasp as if it were a hammer. It tastes like a sweet root. And when you touch it, it's soft but when you bite it, it's crunchy. I sautée it in olive oil. I try to cook them as little as possible so that we can perceive the mushroom.

The Caesar's mushroom is collected when it's mature. We've had incredible sizes… from the size of a thumb to 30 cm. And many people collect it when the egg is still encapsulated and when it’s already open. In my preparations, I present it with the egg closed, but I don't like it when it opens completely because its texture starts to get damaged.

Here is one way we prepare them... 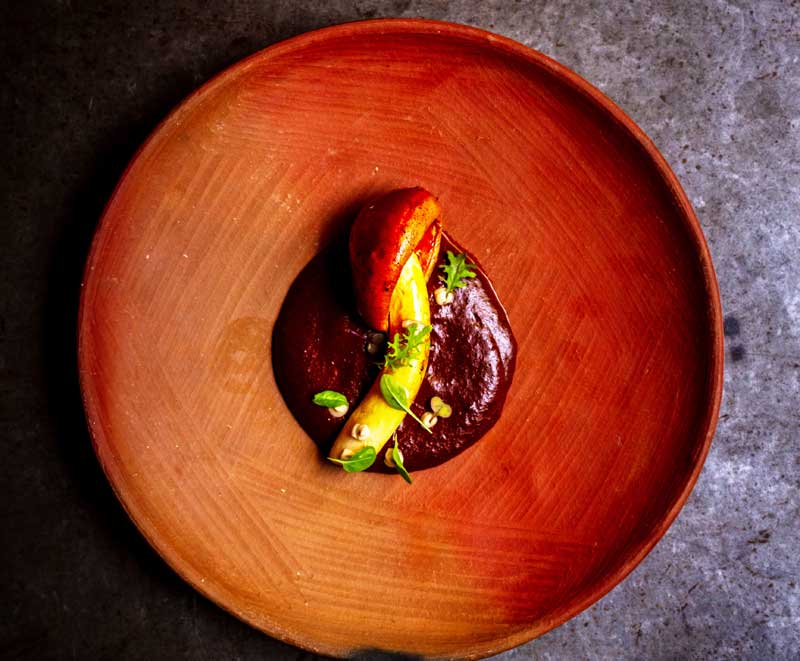 Caesar's mushroom with mushroom mole, kinako cream, and sprouts from our garden. A Danzantes Restaurant dish. 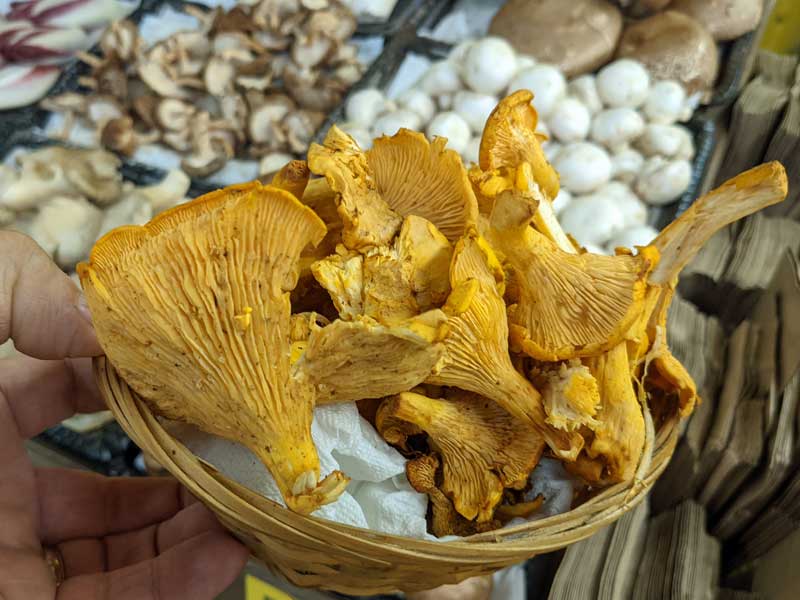 In Spanish, they call it lady’s skirt. In the US and Canada it is known as the Chanterelle mushroom.

In La Mixteca region, it was the most abundant during this season. Its stem is like a small tube, it is like half of a finger, and from there comes a bell-shaped wave that looks like the flare of a skirt. I like it very much because you can eat it almost raw, bite it like a brittle, its flavor is very mild. Many people boil them.

Let me tell you an anecdote. When we went to La Mixteca to meet a mushroom picker, his mother made us a stew. And when it was my turn to cook, I made different preparations, and the lady was surprised because she never imagined that there could be so many ways to cook it.

With the restaurant team, we made mushroom tacos and brunoise of tomato, onion, serrano chile, and sautée them with olive oil and added the chopped mushrooms. But we only put them in the hot frying pan for about 3 minutes with a very spicy sauce. And the lady was used to eating them with zucchini or cooking them until they disappear.

This is what normally happens with mushrooms consumed in Mexico. They are cooked until they disappear. 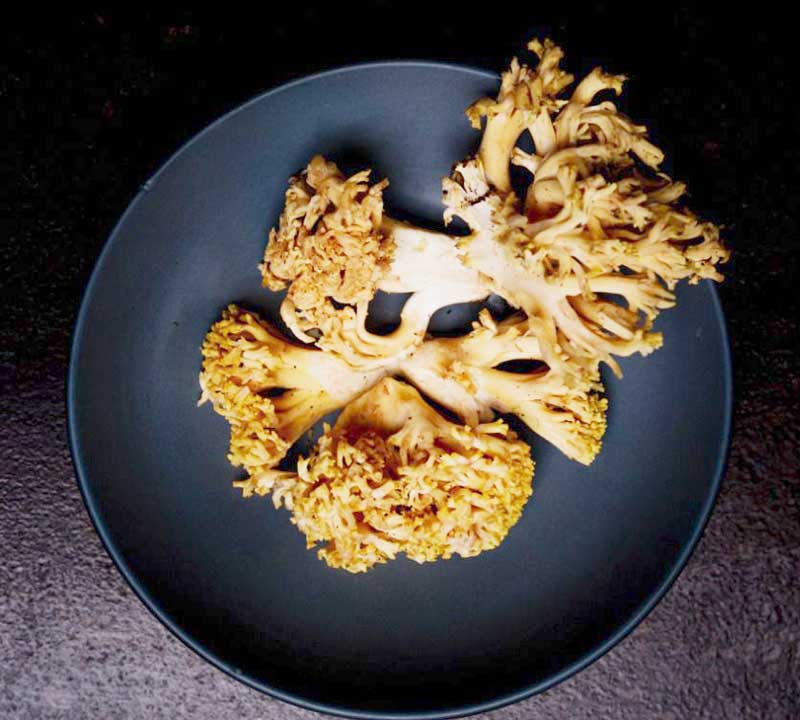 This Cauliflower Coral mushroom is my other favorite... Not for its texture or flavor but for its shape. It is very attractive for decorating dishes.

I sauté them in a hot frying pan for three minutes so they keep their texture. Its flavor is the same as that of porcini, it's nutty. And when you add salt and pepper, it’s an explosion of flavors.

IM: There is an amazing mushroom in Mexico... Huitlacoche (or Corn mushroom)... what is it like? 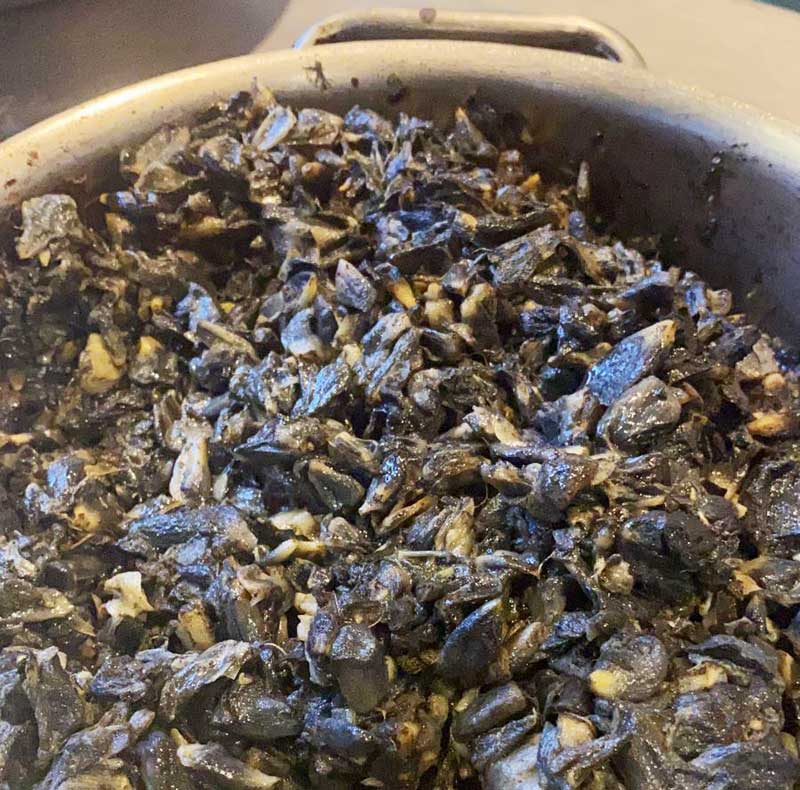 AB: Huitlacoche is a fungus that grows on corn. It is a pre-Hispanic product of Mexican gastronomy. We use it for stuffing, but it has to be very well cooked.

I like to cook it with onion, epazote (an aromatic herb), garlic, and chili. We mix it and then add the huitlacoche. Let it cook over medium heat for about 10-15 minutes until the mushroom is perfectly soft. It has a strong earthy flavor and is bitter. You have to know how to season it well...because if you don't season it, you will feel the bitter taste. Many people don't like it because they don't know how to cook it.

In the beginning, people did not know what it was and let this fungus grow. When our ancestors began to taste it, to remove it from the corn, they realized that it was edible, that it was safe.

As well as champignon mushroom, huitlacoche is the most popular. Its shape is like a white, blue, and black circle.

IM: That's quite amazing. I have also heard that people are a bit shy about buying mushrooms in the markets.

AB: That depends on the location. In Oaxaca, you grow up with all this knowledge. People know a lot. They do a lot of research before selling and buying. And in the cities that don't normally happen.

Sometimes we think that you can only eat huitlacoche or champignon mushrooms, and we don't know that there are thousands of varieties. And that's why people travel to Oaxaca to learn more about these delicacies.

IM: Alex, thanks for taking the time to talk with us and share these wonderful photos!

AB: I was delighted to talk with you about Mexican mushrooms.